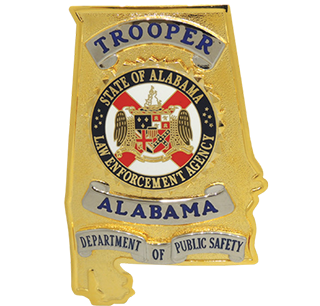 Some students grow up dreaming of becoming astronauts. Others discover a new favorite career every day. For Sgt. Jeremy Burkett, there was never any question about what he would do with his life.

“There were two things I wanted to do growing up. One was to be in the military, and the other was to be an Alabama State Trooper,” he says. “Today, I’ve been in the National Guard for almost 20 years and a trooper for 15 years.”

Burkett is part of what’s become a tradition for Pike County High School. He’s one of six graduates who have become state troopers and gone on to reach high levels in law enforcement. This spring, another Pike County graduate is set to join the fold.

“I think it’s very unusual for a school to have six graduates that hold very senior-level positions in the Alabama Law Enforcement Agency,” says Pike County Schools Superintendent Dr. Mark Bazzell. “We’re certainly proud of the men they’ve grown up to be and the way they’ve represented the state of Alabama.”

Bazzell credits the successful ROTC program at Pike County High School, as well as participation in team sports, with instilling discipline and a sense of service in each of those graduates.

For Burkett, the appeal of the troopers was clear from the beginning. He recalls that even as a child he would see them out in the community helping people and wanted to be a part of that.

“There are times I can remember being in a small town and broken down on the side of the road with my mother and twin brother. They stopped, helped us out and gave us a ride,” he says. “I’m not trying to be cheesy, but when you’re a little kid you think, ‘Hey, that’s something I want to do.’”

That desire to be a positive force in his community was only encouraged during his time at Pike County High School, where he felt like everyone was expected to find a way to serve those around them.

“Brundidge was one of those places where service was just built into it,” Burkett says. “I think a lot of us who went there were very engaged in our time at the school. And I think that was particularly true for people who played ball.”

As a member of the class of 2003, Burkett played football and baseball for the Bulldogs. The discipline and physical conditioning he picked up during that time, he believes, helped guide him toward his careers in the military and law enforcement.

“Once you get used to that lifestyle you really want to continue it,” he says. “There was a standard, just as I have now. If you said you were going to do something there was an expectation that you were going to follow through with it.”

Head of the class

Today, following that standard has led Burkett to his role as recruiting/public affairs coordinator for ALEA’s Office of the Secretary. It’s something he doesn’t think he could’ve achieved without first getting his college degree in criminology from Troy University, an accomplishment he shares with fellow Pike County graduates Col. Jimmy Helms and Senior Special Agent Jackie Hornsby.

“You don’t ever know what you don’t know until it’s too late. And getting into law enforcement at 21 made me realize there were a lot of things I needed to know,” Burkett says. “I felt like getting a college degree would make me more well-rounded, and it did.”

While he is especially proud of his time as a highway patrol trooper and with the state SWAT team, Burkett says the work he does now is the highlight of his career. It gives him the opportunity to craft the agency’s public message and shed more light on the positive role the troopers play in their communities.

“One thing I realized in my time in law enforcement is that our officers do a lot of really good work that doesn’t get out there,” he says. “They try to be humble and want to do the right thing just because that’s our job and what we took an oath to do. But I think it’s imperative that we begin to share more information about the really good job these officers do.”

Bazzell hopes current and future students at Pike County High School will pick up on some of that good work, as well as continue to see these alumni as role models for everything they can achieve.

“They serve as outstanding examples for our students that if you make good decisions, you can choose whatever career path you want,” he says. “Whether it’s in medicine, law enforcement or teaching, if you attend our schools and apply yourself you can succeed at the highest level.”