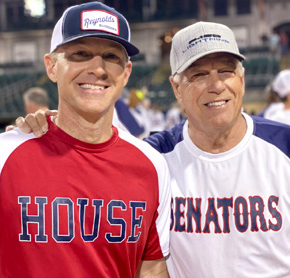 Wes Allen has always taken pride in the rural communities that defined him. But over the last year, the Troy resident’s campaign for secretary of state has taken him across Alabama to small towns, large cities and everywhere in between. No matter the size size of the community, he noticed residents share a sense of civic pride.

“That’s one thing I really appreciated and enjoyed about the campaign trail,” says Allen. “No matter where I went across the state it was good to see how much people care about their communities.”

It’s no surprise that Alabamians’ local pride resonates with Allen. After all, it’s his own upbringing in Cottondale and his service representing District 89 that he credits with instilling the values that have guided him throughout his career.

“A lot of life lessons come from growing up on a dirt road,” he says. “Growing up on the family farm, being around cows and hanging out with my Grandad and Dad. Those two men imparted on me life lessons like what it means to get up early and go to work, to see a job through when you start it, the value of hard work, doing what you say you’re going to do and being a man of your word.”

Now that he has been elected Alabama’s secretary of state, Allen hopes to bring those same rural values to the state capitol building.

The son of a lawmaker — his father, Gerald Allen, served in both the Alabama Senate and House of Representatives — Allen didn’t necessarily plan to follow in his dad’s footsteps. As a student at the University of Alabama’s New College, he earned a degree in athletics administration with hope to work in college athletics.

He was also an athlete himself as part of the Crimson Tide football team under coaches Dabo Swinney and Gene Stallings. While more of a fixture on the scout team than an everydown player, the experience was valuable as he learned important lessons and forged lasting friendships.

“A lot of little boys don’t get to realize that dream. It was about getting up every day, stacking days on top of each other, getting there early and being the last to leave,” he says. “Football taught me a lot about life. It teaches you how to handle losses, how to handle disappointments, how to get up when you get knocked down and to keep on keeping on. That was a really special experience.”

After completing his degree, Allen received a graduate scholarship to Troy University where he studied sports management. The Troy community felt similar to his roots in Cottondale.

“The small town really appealed to me,” he says. “I enjoyed the people of Troy, made a lot of friends during grad school, and my wife and I started our married life together while we were in Troy. So it was just a great community for us to raise our kids in and we are so appreciative of how Pike County and our community has embraced us since we moved to Troy. It’s our home.”

Following graduation, Allen put his degree to work in Troy University’s athletics department. He and his wife, Cae, were happy, and it wasn’t until the office of Pike County probate judge became available that they began to consider a new direction into public office.

“My wife and I had prayed about it and really given it considerable thought before we decided to seek the appointment,” says Allen. “There were three years remaining on that term and fortunately God opened up a door there. We just took those values that I was raised with and worked extremely hard day in and day out there in the courthouse.”

Despite seeing his father serve in public office for years, Allen’s own experience in office was illuminating. The opportunity to help those who appeared in his court was invaluable and would shape his philosophy throughout his political career.

That sense of responsibility didn’t come as a surprise to anyone who knew Allen around Troy. After all, he had been a presence in the community for years — as a rec league coach for Little League Baseball, soccer and basketball. He was also a fixture in his church, where he continues to lead a men’s Sunday school class.

Allen was elected to his first full term as probate judge in 2012. As his time in the court started to wind down he set his eyes on a new office. As judge, he had been able to have a meaningful impact but was frustrated by some of the rules coming from unelected officials in Montgomery. So in 2018, he ran for and won a seat in the Alabama House of Representatives representing District 89. Four years later, another opportunity presented itself.

“I believe the good Lord has a path for each and every one of us if we’re attuned to His will,” Allen says. “We enjoyed that time as a probate judge and then there was an opportunity to run for the House, and we did that. Then when we saw another opportunity for secretary of state and we decided to seek that role.” 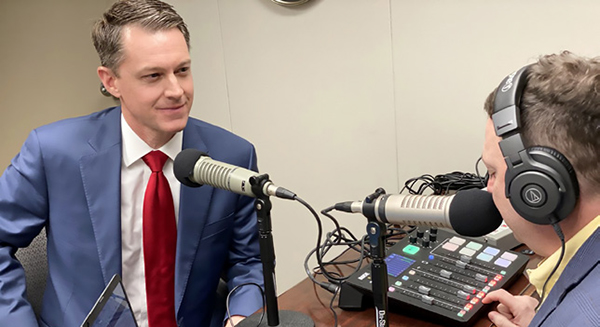 Allen is interviewed on the “Jeff Poor Radio Show.”

Like many recent secretary of state races, much of the focus in Allen’s campaign was on election security. Since winning, he has reiterated his intent to withdraw Alabama from the Electronic Registration Information Center, in which partnered states share registered voter and drivers license records to flag voters who have moved, died or are registered to vote in multiple states.

In his new role, Allen will also be responsible for maintaining governmental transparency and managing the registration of new businesses.

“We don’t plan to have any drastic changes when it comes to business services because we think it’s operating pretty good now,” he says. "We’re going to get in there and see where we can stretch a nickel into a dime and take care of taxpayer dollars. That’s one thing I learned being a local elected official in the courthouse, and we’ll have those same values in the state capitol.”

More than anything, Allen is thankful for the path his career has taken and eager to take on the responsibilities his fellow Alabamians have placed on his shoulders.

“It’s a very humbling experience to know that the people of Alabama have put their trust in you,” he says. “But we’re excited, and I think my track record and the way I’ve operated shows we’re not going to change. We’re going to get up every day and work as hard as we can for the people of Alabama.”