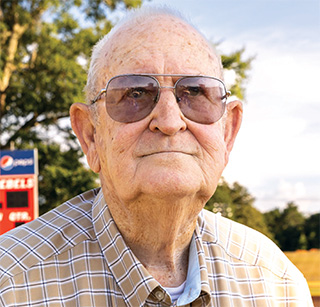 When Douglas Green tapped a smartphone screen to turn on the new LED lights at Green Memorial Field at Zion Chapel School in 2021, he experienced a moment of dèjá vu.

Sixty years earlier, Green flipped the switch that lit up the Rebels’ field for the first time. The moment was the realization of a dream of his late father, Essie D. Green, a teacher and longtime member of the South Alabama Electric Cooperative who advocated for the lights but died in 1961 before ever seeing them illuminate the field that carries his name.

“He was instrumental in getting the lights for the football field,” Green says.

With the assistance of PowerSouth Energy Cooperative — the cooperative’s wholesale power provider — SAEC was able to update old lights and transition them to LED in 2021. This time, with Douglas Green on the board.

His devotion to bettering his community dates back to his youth. As a young man, he sawed logs from sunup to sundown, earning $5 a day. He went on to teach and guide scores of children in this area and helped lay the foundation for progress as a longtime member of SAEC’s board.

While things certainly do change with time, one thing has remained constant — Green’s commitment to serving SAEC members.

“If there’s anything good going on in the community and we can help, we will. That’s what co-ops do,” he says.

A lifetime of service

Green started his first year of school at Zion Chapel School in 1939. He transferred to, and eventually graduated from, Elba High School.

After graduating, he was helping a local man by sawing logs for work. One day, after sawing down a large oak, Green told the man, “If you need somebody to help you finish that, you’re going to have to find somebody else.” He decided right then and there that he was going to go to college, even though he always thought he would be done with school after high school graduation.

“I decided there had to be a better way to make a living than pulling that crosscut saw and picking those red bugs off me every night,” he says. Soon after, he enrolled at Troy State Teachers College, now known as Troy University, and graduated with a teaching degree in 1954. He decided to pursue teaching as a career because both his father and mother, Madie B. Green, were teachers.

After graduating college, Green joined the U.S. Army and served until he was discharged in 1956. He then returned home and took a job with the Coffee County Board of Education.

During that time, the area had several junior high schools. Green taught for short stints at Basin, Newbie and Pine Level and eventually settled at Zion Chapel in 1961, teaching sixth grade. He became principal in the early 1970s and retired in 1984. While at the school, he coached junior high basketball and drove a bus.

Even though he has been retired nearly three decades, his positive impact on students’ lives has left a lasting impression. He says his favorite part about teaching was the fellowship with the kids. “I had a good rapport with students,” he says.

He recalls a student who was stealing snacks from the on-campus snack stand, the canteen, on his way to class every day.

“I had a ninth grade boy whose daddy was a preacher. That lil ol’ devil was lazy and wouldn’t go to class. Some other students said he was always late to P.E. because he goes to the canteen and sticks his hand through the wire and steals stuff,” he says.

One day, Green waited inside the canteen to see if he could catch the youngster in the act.

“Sure enough, here comes that little boy. I moved the stuff back to where he couldn’t reach it. He strained and strained then finally, I stood up and said, ‘I’ll push it closer so you can reach it.’ I thought he was gonna faint,” he says.

Green took the boy to his office, where the boy begged him not to call his father. The two reached an agreement: Green said he would document the offense on a piece of paper, and the two would sign and date it. Then, he would put the paper in his “blackmail folder,” along with other students’ offenses.

“I said, ‘I’ll tell you what, if you never come back in my office for being in trouble anymore, I’ll never let anybody see that except me and you,’ and he said ‘Deal,’” Green says.

In the following days, Green overheard teachers discussing that student and the immediate change in his behavior.

Some students, now adults, have thanked Green for showing them mercy as children, as he never told their parents about these minor offenses.

“I had promised them I wouldn’t tell anyone. If it was your kid and he told me something confidential, and I told, he would’ve never had confidence in me,” Green says, adding that when he retired, he burned the folder.