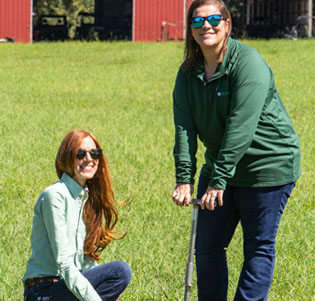 Pike County Extension Coordinator Abby Peters wants to teach her nieces about how food gets on the dinner table.

“I tell them, ‘You don’t just go in the grocery store and the meat appears,’” she says.

As a second-generation cattle farmer, it’s important to her to make sure her nieces, and the community, understand the hard work that goes into ranching and food production.

The Alabama Cooperative Extension System, also called ACES, has a goal of engaging and educating Alabamians through enrichment programs. The Extension system offers research-based programs on a variety of subjects ranging from forestry and wildlife to family and consumer sciences.

ACES acts as an outreach organization for Alabama A&M and Auburn universities, and there is an Extension office in each of Alabama’s 67 counties.

“The great thing about the extension is we provide nonbiased research-based education,” he says. “People can Google anything and find a result, but we are a trusted and reliable source of information.”

Mauldin began his career with the Geneva County Extension Agency in 2014, and then he came back home to Coffee County as the extension coordinator in 2017. He’s originally from Elba, so it was especially rewarding to serve his home county.

Mauldin participated in 4-H in elementary school and has always loved being involved with agriculture. He dove into the field of retail agriculture after college and was managing a Tractor Supply store when he received the opportunity to work for ACES.

During the height of the COVID-19 lockdown, extension offices saw an increased interest from the public in gardening and food preservation.

“People were looking for something to do, and we were lucky to have the infrastructure to do Zoom calls and to be able to instruct people,” he says. Now, those programs are offered in person and remain popular.

Along with 4-H education and after-school clubs, ACES offers programs targeted at adults on topics like livestock production, trapping feral swine and controlling invasive species like cogongrass, an invasive plant known with a reputation as the worst weed on earth. As it spreads, cogongrass replaces the native species wildlife ordinarily feeds on. Animals cannot digest cogongrass because it has a high silica content.

“We’re trying to educate people on how to properly identify it and to control it without spreading it,” Mauldin says. “It spreads so easily. If you mow or bush hog it, the seed can spread and even get on equipment and distribute that way.”

Farming has always been a way of life for Crenshaw County Extension Coordinator Amanda Evans. Her family operates a cattle farm, and her grandfather raised crops. “I remember climbing into peanut wagons when I wasn’t old enough to help much,” she recalls.

A native of Luverne who raises cattle herself, Evans says her family has always known they could call on the local extension agent when they needed something.

“That’s who you called,” she says. Now, she is the person others reach out to for help. Evans has a background in environmental science, and she began working for ACES two years ago.

She has family ties to South Alabama Electric Cooperative. Her grandfather, Joseph Thomas, was a member of the board of trustees in 2014.

A popular program at the Crenshaw County Extension is Farm Safety Day, when all the sixth graders in the county come together to learn about a working farm and how farmers stay safe while tending to their crops and animals. Evans brings in several organizations, like the Natural Resources Conservation Service and the ALFA Young Farmer Federation, to offer their insights to the children. SAEC also participates by bringing the electric safety demonstration trailer to teach kids how to handle situations like downed lines or car accidents.

“All of the things they learn can be applied in many aspects around the farm,” Evans says. “It’s a big hit. There are some people in this area who have never even seen a lawnmower in person, so it’s a great way to get them to interact with things they don’t normally see.”

Other popular programs are self-defense classes and a budget program called Your Money, Your Life.

“We try to offer a little bit of something for everyone,” she says.

Abby Peters was born and raised in Pike County. In addition to being the county’s extension coordinator, she is also a cattle farmer. She and her father work two farms, one in Henderson and the other in Shellhorn.

“The reason it’s so important to me is that it’s important to my dad,” she says. “Seeing his dream over the years has meant a lot to me.”

Peters has a background in accounting and worked at Troy University before moving over to ACES three years ago. She has always been involved with 4-H, a program also supported by the extension service.

All of the extension coordinators know if they need a space to do a program, SAEC is always willing to help out and offer its facility in Troy as a meeting spot.

“They’re my go-to,” Peters says. “Any program I have, I always prefer to partner with SAEC. SAEC is great because they have that new facility with the kitchen and state-of-the-art tech. Everything was set up from equipment to tables and chairs. The space is so accommodating. They are always so great and wonderful to partner with.”

The extensions in Pike and Crenshaw counties also partner with SAEC. For example, the with the Alabama Department of Agriculture and Industry and SAEC to host the A Healthy You, A Healthy Farm initiative. The program, which drew about 50 people, raises awareness of suicide and the agricultural industry. The program educates everyone from farmers to medical professionals and even lenders.

“The ag lenders talk to these farmers every day. They’re in the throes with them because — especially in 2020 — people were having trouble paying their bills,” Evans says.

Another important outreach event is Farm/City Week, which bridges the gap between farmers and industry. It’s a week-long event for students that includes contests and a farm day. All third graders in the county come to the Pike County Cattleman’s Association building where local industries bring some of their products and stage educational demonstrations.

For example, Wayne Farms brings baby chickens, and the National Resources Conservation Service brings its soil tunnel trailer, which kids can walk through and learn about how plants grow. Other local industries provide equipment like tractors and a fertilizer spreader truck. The Goshen High School Ag Academy brings cows, pigs, horses and goats for the kids to interact with.

“It’s a lot of fun. You would be amazed at how many children have never seen farm animals in real life,” Evans says.