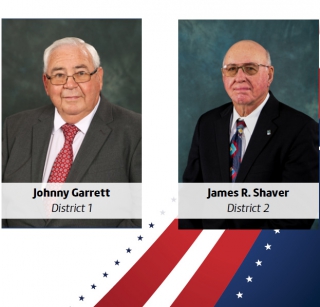 The annual meeting of the membership of South Alabama Electric Cooperative was Tuesday, Oct. 25, at the SAEC Office Complex.

This year’s annual meeting featured a business session, and members could vote by mailing their ballot. Each member who voted received a $20 bill credit. This year, there were 2,482 votes cast, which met the requirements for a quorum.

“We appreciate all the members who voted in this year's election. Participating in the governance of the cooperative is one of the most important aspects of being a member of an electric cooperative,” SAEC General Manager David Bailey says. “These men have done a great job representing members of their districts, and we know they will continue to do that in their next term.”

Meet the new board members

SAEC had two board of trustee positions up for election in District 1 and District 2. Both sitting members were reelected. In District 1 Johnny Garrett defeated Steve Thrash, and in District 2 James R. Shaver defeated Jeffery Warrick.

Garrett and his wife, Patricia, live in the community of Pronto in Pike County. He is retired after 35 years as owner of the Piggly Wiggly locations in Brundidge and Troy. He is a member of Brundidge United Methodist Church, where he serves as a trustee and president of the church council. He is a member of the Pike County Cattlemen’s Association and serves as treasurer.

Shaver and his wife, LaRue, live in Goshen, where he is a farmer. Shaver is active in the Lions Club and is a director in the Pike County Farmers Federation. He is also a trustee with Little Oak Methodist Church. He is a member of the Pike County Cattlemen’s Association. Also, he has earned his Certified Cooperative Directors certificate and Board Leadership certification from the National Rural Electric Cooperative Association.