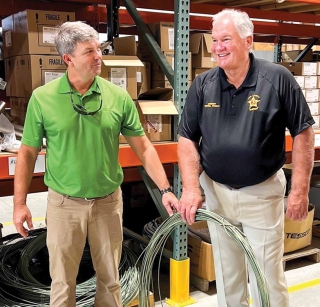 Electric linemen and police officers have always been considered part of the first responder community, serving their neighbors in jobs that are often dangerous. Last spring, they teamed up to put an end to the series of copper thefts happening throughout the SAEC service area.

This was an issue that needed to be addressed immediately, because it is very dangerous to steal copper from an energized power pole. It’s also a very expensive crime.

In order to stop the copper thefts, SAEC worked closely with the sheriff ’s departments in Coffee, Pike and Crenshaw counties, which the co-op serves. Thanks to their efforts, the culprits were apprehended and charged to the fullest extent of the law.

Russell Thomas has been the Pike County sheriff since 1994. He will start his eighth term in January. Thomas began his law enforcement career at the University of Troy as a member of the campus police department. He went to the Pike County Sheriff ’s Department as a deputy in 1988.

“I’m a Goshen boy,” Thomas says. He has lived his entire life in Pike County and dedicated his professional life to serving and protecting others. He has been in law enforcement for 38 years, and in his tenure as Pike County sheriff, the county's population has tripled in size.

“When I first started at the sheriff ’s department, there were six deputies and just over 600 square miles to cover,” he says. “The county has grown since then, and there are a lot more residents. It’s a good place to work, live and raise your family.”

Early on in life, Thomas realized that serving people was his passion. “I enjoy talking and visiting with people, and it turned out to be my niche,” he says. “I enjoy serving the people.”

Five days after Terry Mears graduated from high school, he decided to join the U.S. Navy.

“I was 18 and was working at a saw-mill down in Dozier, and I just didn’t see a future there,” he says. Mears was sent to Guantanamo Bay, Cuba, in September 1980 on his first duty assignment.

He spent most of his naval career with front-line units looking for ASW (anti-submarine warfare). He then went to a strike fighter squadron and eventually to the Office of Naval Intelligence in Washington, D.C.

After 24 years of service in the Navy, he retired as a chief petty officer and returned back to his home in Alabama.

After Mears retired from the Navy, he chose law enforcement as his second career. “I respect what they stand for. I spent 24 years of my life going into harm’s way, and first responders do it every day,” he says. “It’s something I was accustomed to doing.”

Mears began working at the Coving-ton County Jail in 2005 and has worked in several other municipalities as an officer. He also served as the police chief in his hometown of Dozier. He was elected as the Crenshaw County sheriff and took office in January 2019.

“I came up through the ranks,” he says. “I always say it’s important to know the people you police.” 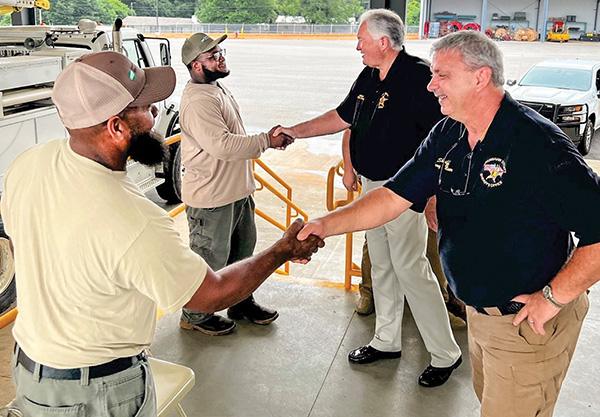 Last spring, SAEC informed local law enforcement there was some cop-per being stripped from power poles. Tampering with electrical equipment is extremely dangerous and also illegal. “We assigned deputies to patrol the area, and I called some investigators in,” Thomas says. “Someone was scaling the power poles and cutting the neutral line.”

Having a good working relationship and partnering with SAEC is a special bond for both sheriffs.

“We have a really special relationship with SAEC,” Thomas says. “The men and women who work there live in our com-munities, and a lot of us even went to school together. Some really good people work there. They do a great job serving the citizens of the area.”

Mears says that when the community is in need, SAEC always steps up and is always happy to help.

“We require assistance from them when we have bad storms, and I train my deputies to look for downed poles and things of that nature. We work hand-in-hand helping each other out,” Mears says.

Both sheriffs express their gratitude to the citizens for their help in finding the culprits who were stealing the cop-per wiring. As always, they request that citizens help take care of the community and their neighbors.

Stealing copper is not only dangerous, it’s illegal. As an SAEC member, you own the facilities, the line, the wires and all other tools that keep the lights on in our area.

Unexpected outages can be caused by copper theft in our service area. And every time copper is stolen, it costs money to replace it and make repairs. Help us help you!

“If you see something or know something, say something,” Sheriff Russell Thomas says. “We need the public to be our eyes and ears so we can be successful and solve crime.”