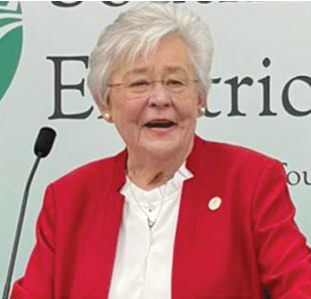 She stopped in Troy to speak to a group of local elected officials and supporters during the monthly Pike County Republican Party meeting after her tour of the new SAEC facility. The building was completed last fall and includes state-of-the-art equipment and technology to better serve SAEC members, as well as a community room that can be used for meetings.

“Our cooperative was honored to host Gov. Ivey and the leaders of Pike County,” South Alabama General Manager David Bailey says. “Gov. Ivey has been a tremendous leader for our state, and we appreciate her taking the time to visit our area and speak about her vision for our state moving forward.”

Russell Johnson, chairman of the Pike County Commission and Pike County Republican Party, introduced Gov. Ivey to the group. “We’re always excited to have Gov. Ivey in Troy,” he says.

Gov. Ivey spoke to the group of around 150 people in attendance about the Rebuild Alabama grant program, among other local projects she has helped become a reality.

In his introduction, Johnson mentioned an encounter with Ivey while she was still lieutenant governor. Ivey explained to him the difference between being a politician and a statesman and that a statesman represents the people served and does what’s best for them. The talk made an impression on Johnson. “That has always stayed with me through the years,” he says. “She’s an excellent example of a statesman.”

“It is such an honor for Gov. Ivey to take the time to come visit us at SAEC and tour the new facility,” Bailey says

Ivey announced in 2021 that she is running for reelection for her second consecutive elected term this year. 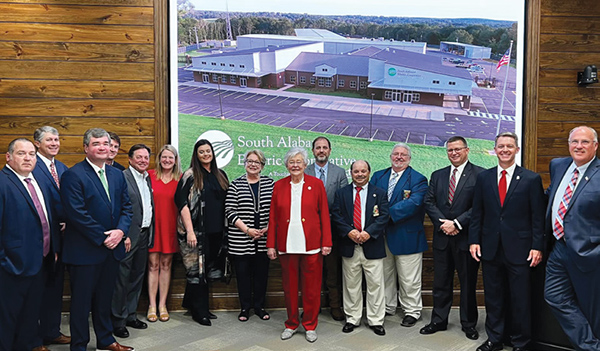 Gov. Kay Ivey speaks to the Pike County Republican Party during its monthly meeting in May.