Most people see the range of someone’s life and notice the dates at the beginning and the end. They think of how long or short that life was, what the world was like when that person entered it and how it had changed by the time they left. But when Jessica Madison looks at her father Nathan Madison Jr.’s life, from his birth in 1950 to his passing earlier this year, her focus is on what’s in between.

“For me, the most important part is that dash between the years because that’s where the work is,” she says. “And my dad had an amazing dash.”

Known as “Junior” to his colleagues and friends, he was recognized throughout the community for his job at South Alabama Electric Cooperative. To him, it was part of his calling to serve people and help out wherever he could.

“People were always saying, ‘That’s the light man.’ That was how he was known out in the community,” Madison says. “Even people I didn’t know who knew him were always telling me about how he helped them with this or did that.”

That was exactly how his fellow lineman Dewayne McGhee knew Junior before joining the cooperative. McGhee first saw Junior when the veteran lineman would come to his parents’ house to restore power. When McGhee graduated high school in 1989 and was working as a substitute bus driver, Junior approached him about working at SAEC. Since then, McGhee has put in more than 30 years with the cooperative and risen to the role of construction foreman.

“The biggest thing I learned about Junior over the years was that he didn’t just want to come here to live and die,” McGhee says. “He wanted to make an impression on somebody else and leave his legacy for someone else to go on. And that’s what he did.” 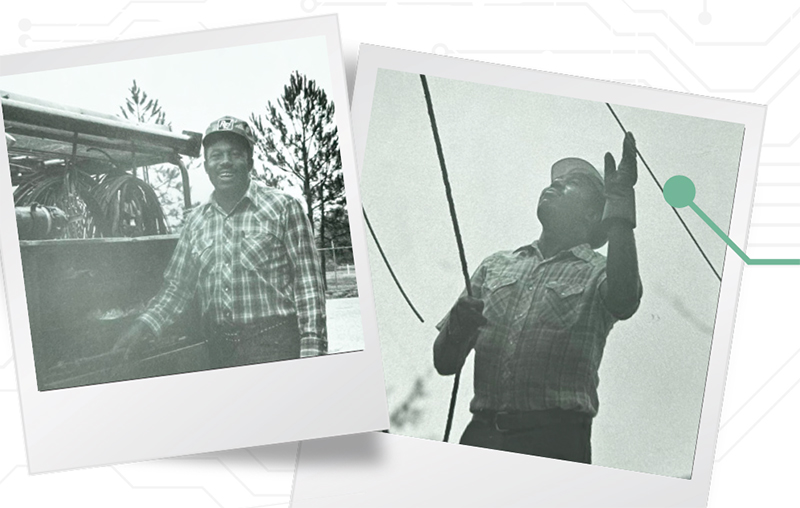 There were few things Junior loved more than being on call to make repairs during major outages.

Junior joined SAEC in 1972 after two years of service with the U.S. Marine Corps in Vietnam and a stint at Luverne Slack Factory. His first job was on a construction crew in Troy before he became an assistant to Serviceman Ed Stroud in Crenshaw County.

The two of them were responsible for outages, bill payments and just about any member issues that might come up in the area. And, because the cooperative didn’t have much in the way of formalized training at the time, Junior had to be a quick study.

“Back then most of what Junior learned and his knowledge of how the system worked was picked up on the job. He really had to apply himself to learn everything and how to work with electrical equipment safely,” says former General Manager Max Davis. “In fact, he was way above average in learning the business and looking at problems from other people’s standpoints.”

Years later, when Stroud retired, Davis had no doubts about who should fill the position.

“I think Junior would have been successful in any business. But being in a cooperative, where your members are the real reason for being there, Junior’s success was just automatic,” says Davis. “He had a way of calming people down and working through whatever issue they might have.”

In the early 2000s, those skills earned Junior another promotion to general foreman, where he was responsible for managing the cooperative’s right-of-way operations, overseeing contractors and continuing to work face-to-face with members across the whole system. But no matter how his responsibilities changed, he always maintained his dedication to helping others at every opportunity.

“He listened to people and would always help them, even if it wasn’t explicitly part of his job,” says General Manager David Bailey. “Those are attributes that are not as prevalent as they used to be 40 or 50 years ago. I always said he had a servant’s heart.”

One of Junior’s favorite ways to help others in his community was by opening doors to opportunities at the cooperative. He always encouraged new graduates to join the SAEC team, just as he did for McGhee, and would put in a positive word for candidates he knew would be a good fit.

“Many of the employees at SAEC today were based on recommendations from Junior Madison. Sometimes I’d ask him if he knew someone who applied and he’d always say yes because he knew just about everybody,” says Davis. “He was really interested in having young people from our community join the co-op because it was a good job.”

His advocacy for others didn’t stop there. Junior was dedicated to giving the linemen around him the training he didn’t have starting out. Over the course of his career he personally trained more than half a dozen linemen, including Jeffrey Eiland, Tony Greer, James Horn, Billy Ray Lester, Jason Sipper, Jeff Wilkerson and Jay Adair. Many of them have since gone on to serve in leadership roles at the cooperative or achieve A-class lineman status.

In honor of those achievements, SAEC recently announced it will be offering the Nathan Madison Jr. Electric Lineman Scholarship each year to send an aspiring minority lineman to a lineman apprentice school.

“That’s an imprint on life when you have something that remains after you. Not everybody leaves this world with their name attached to something in it,” says Madison. “It’s a testament to my dad, his hard work and the impact that he made that people recognize it.”

She was especially moved that SAEC General Manager David Bailey, Office Manager Mark Hill and Manager of Accounting and Finance Elizabeth Stough were able to visit her father the day he passed away. Bailey told Junior about the scholarship and the legacy he would leave behind.

“For that to be something he was able to hear and understand on Earth before he left really was a lot for me,” says Madison. “I feel like it was something that probably helped him to release. To realize his work was done is a beautiful thing to me.”

For all that Junior Madison gave to the cooperative and his community, members of his family were also asked to give of themselves. Born after her father started working at SAEC, Jessica Madison says it will be strange not having that constant connection to the cooperative.

“I don’t have a memory of my father where SAEC is not involved,” she says. “Where we didn’t hear the radio going off while he was on call, or have a truck of some kind in the yard. We knew how much he loved it.”

No one understands that connection to the work better than the people who did it with him. McGhee also recognizes the sacrifices it required of the other people in Junior’s life.

As challenging as those late-night departures and long hours may have been, Madison has no doubt it was all part of her father’s calling. Watching him, she and her sisters learned everything they needed to know about serving their community and putting their faith into practice.

“Getting those calls at 2 in the morning was just something he lived for in a way that I can’t even comprehend myself,” she says. “It was how he tended to the community. Giving them a word, speaking to them, sharing with them, buying them food, whatever it might be. He truly had a servant’s heart. It wasn’t just a job to him. He knew he was going to touch somebody’s life in some way just by being there.”