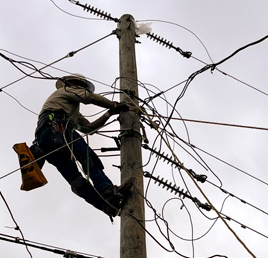 In early October, Hurricane Ian made landfall on the western coast of Florida and left almost 3 million people in the dark. The Category 4 storm obliterated homes and businesses, causing more than $60 billion in private insured losses. At least 119 people died in Florida, mostly due to drowning.

When a major storm like this hits, it causes extensive damage to the electric system that the affected cooperative’s crews can’t repair on their own. How do they quickly and safely restore power to that many homes and businesses? With help from their fellow cooperatives.

One of the Seven Cooperative Principles is Cooperation Among Cooperatives, and that principle is often on full display following a major storm. The post-Ian cleanup is no exception. SAEC lineman crews joined their counterparts from over 30 states across the country in responding to the destruction left in Hurricane Ian’s wake.

“As co-ops, we all try to help our sister systems who are in need when we can,” SAEC Manager of Engineering and Oper-ations Ronald Wade says. One of Wade’s duties is to help coordinate a crew to help with storm restoration.

A crew of eight SAEC linemen volunteered to go to Fort Meyers, Florida, and assist Lee County Electric Cooperative with restoration efforts. The crew stayed in the area for 10 days, offering expertise and equipment resources. The crew was originally scheduled to stay in the area for just 7 days but stayed another three days to help restore power to as many people as they could. 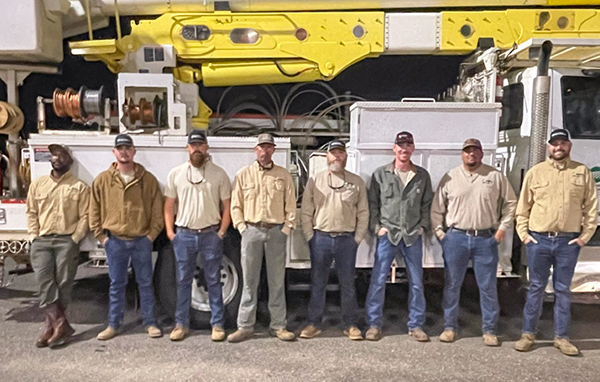 Often, when crews report to work after a storm has hit, many of them work 15 hours a day and stay in mobile sleep trailers.

“The conditions aren’t ideal, but we see it as paying back the gratitude that was shown to us in times of need,” Wade says.

This type of cooperation from sister cooperatives throughout the state was demonstrated when an unexpected storm producing high-speed winds rolled through the SAEC service area in April 2020, leaving 12,000 members without power. The winds caused extensive damage to the system, including downed lines with trees on top of them.

Within a couple of days, lineman crews from around the state were reporting to SAEC to help get members’ power turned back on.

That’s all part of the cooperative spirit.

“At some point, we are all going to need help from outside sources,” Wade says.