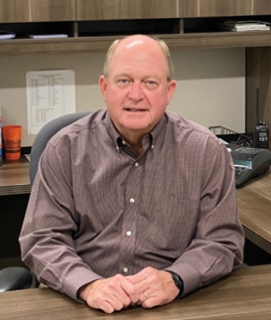 When Wayne Mitchell first joined South Alabama Electric Cooperative 42 years ago, it looked a little different than it does today. There were no computers in the office, no cellphones to communicate in the field and fewer bucket trucks to give linemen a lift.

“They climbed poles a lot more back in those days, because we only had a few bucket trucks,” Mitchell says. “I think my first day was when the cooperative got its third bucket truck. Now we have nine or 10.”

Now retired, Mitchell arrived at the cooperative after he’d worked on the railroad and in trucking. His first assignment at SAEC was clearing rights of way before joining a construction crew. From there, he moved indoors, drawing up work orders with help from Grady Motes, who was the operations superintendent at the time.

“I was under him in the construction department, so I learned how to do staking for power lines and file work orders,” Mitchell says. “He taught me a lot.”

Mitchell went on to become service supervisor and then a staking engineer before being named construction superintendent. His final position was manager of stores, where he was responsible for maintaining an inventory of materials like the wire, poles and transformers SAEC crews need to do their job.

“Everything has become more mechanized than when I started,” he says. “We have a lot of bucket trucks and digger derricks. Part of my job was to oversee that fleet of vehicles and make sure they were maintained.”

For all the pride Mitchell takes in having helped the cooperative develop its modern fleet, he still feels his greatest accomplishments were marrying his wife, Cindy, and starting his own family. Their daughter, Blakely, lives in Dothan with her husband, Nathan Ellis, and their twin boys, Barron and Sellers. Their son, Britton, lives in Troy with his wife, Amanda, and their daughters, Harper and Madison.

In retirement, Mitchell is looking forward to spending more time with them and his mother, Brunese, who turned 90 in February. But after more than 40 years serving SAEC’s members, he may need to get used to choosing what to do with his time.

“I really haven’t figured out what I want to do yet,” Mitchell says. “It still feels like I’m just taking some time off. I’m looking forward to spending more time with my grandchildren, hunting and playing golf. But it will just be nice to be able to do it when I want to do it.”