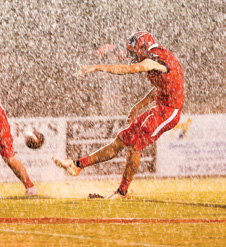 For coach Mario White, Pike Liberal Arts’ AISA AAA title was about more than football. When he left his position at the University of Alabama as a strength and conditioning coach under Scott Cochran and special assistant to Nick Saban, he knew his first head coaching position was part of a bigger plan.

“I honestly believe God put us together for a reason,” White says. “Last year was the 50th anniversary of Pike Liberal Arts. It was the year Rep. John Lewis — ‘The Boy from Troy’ — passed away, and our country was going through a lot with the George Floyd protests. So we had an opportunity to show the world that if some young black and white boys in Alabama can come together to achieve something great, so can everybody else.”

The Patriots’ faith met a stern test in the championship game, where they faced off against a Glenwood team that had handed them a 26-7 loss late in the season. But after a few restless nights, White found peace the Sunday before the big game.

“I told the boys we need to get ready and put it in God’s hands,” he says. “So that afternoon in the weight room and all week, we were calm and collected. I didn’t raise my voice to yell and neither did any of the boys.”

After a back-and-forth half that ended with the teams tied 21-21, White saw the light come on in the eyes of his players, including his son and quarterback, Mayes White, who, despite being committed to play baseball at Florida State next season, couldn’t pass up the opportunity to play football for his dad.

Mayes went on to break the tie in the third quarter with a 95-yard touchdown run that led the Patriots to a 38-21 victory over the Gators. And while his dad may have been nervous about his son getting injured playing football, their moment of celebration after the game made it all worth it.

“For us to hold that trophy together and to have that moment together is something I’ll never forget for the rest of my life,” White says. “Now I’m just his dad and his fan.” 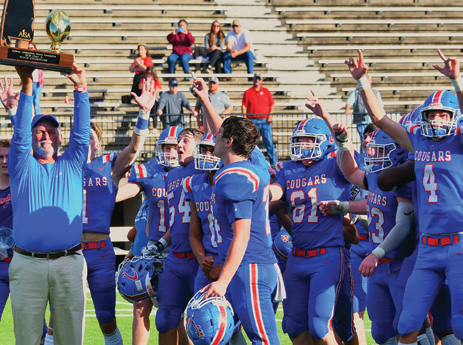 Putting in the work

Trailing at halftime of the biggest game of the season would be a concern for most teams. But Crenshaw Christian Academy and coach Wayne Grant were confident they had their AISA Class A title opponents right where they wanted them. After all, it wasn’t the first time they had come from behind that season.

“The biggest thing we emphasize all the time is being in better physical condition than anyone we play,” Grant says. “So at halftime we were trailing, but about where we needed to be. I saw that our opponent wasn’t running as well as they did at the beginning of the game, so I told the team the second half would be in our favor if we stuck to the plan and stayed away from mistakes.”

The Cougars met rival Abbeville Christian Academy in the championship game and went into halftime trailing 14-6. But two quick touchdowns off of turnovers early in the second half put Crenshaw back in control. The Generals regained a brief 20-19 lead toward the end of the third quarter but could barely move the ball in the final 18 minutes of the game, totaling just 40 yards and three first downs while Crenshaw pulled away to a 40-20 lead.

The win earned Crenshaw’s first state title since 1997 and is Grant’s sixth as a head coach after years of success at Pike County High School. While the Cougars came close during his first two seasons in charge, reaching the finals in 2018 and the semifinals in 2019, Grant credits the 2020 championship run to learning from those experiences.

“I had several players who were sophomores when I came here two years ago,” Grant says. “This year, they had the experience of being in those games. They knew my terminology, and they knew how to adjust to situations when I would coach them on the sidelines. That played a big role in us winning this year.”

Grant is proud to get Crenshaw back to winning ways after more than 20 years. But his greatest hope is that his players and the school community that supported them will carry that championship mentality with them in their day-to-day life.