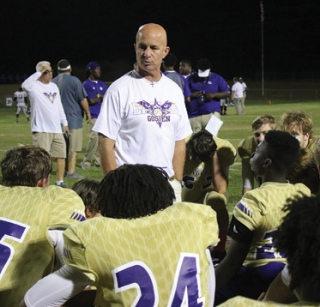 Goshen football has played a major part in the Snyder family for decades. Coach Bart Snyder spent 34 years on the sidelines with the Eagles. During that time, he coached his two sons, Brock and Will. His wife, Stephanie, and mother, Linda, were in the stands for every game. His father, Keith, would have been there beside them, but he was busy calling the games from the PA booth.

Now, after 12 years as head coach of the Goshen Eagles, Snyder is retiring. And in some ways, so is the rest of his family.

“My younger son graduated last year, and my father is retiring from the booth, too,” Snyder says. “We’re all letting that go and letting someone else take the reins. They can continue what the others before us have built.”

That decision brings a close to his career as the winningest coach in Goshen football history, with a 74-55 record. It also comes on the heels of a difficult first season for the Eagles in Class 3A, as the team made several long trips for away games and was forced to forfeit two games due to COVID issues.

Still, it wasn’t an easy decision to make. Snyder’s parents went to Goshen High School before him. He even wore the purple and gold himself and tried his hand at quarterback once upon a time. But for all his family history with the school, Snyder ultimately felt now was the time to help Goshen football make a fresh start.

“I enjoyed every minute of it,” he says. “It was an incredible opportunity to be home, in the place where you played, and know that the young men you’re coaching are experiencing the game you love on the same field you played on. And hopefully, I was able to instill something in them that will have a positive influence in their lives.”

Goshen football was part of Snyder’s life from the very beginning. He played peewee football for the school and worked his way up to junior varsity by the time he graduated in 1986. He attended Troy University, where he studied physical education, but he couldn’t stay away from Goshen for long.

“I always thought that working with young people was something I wanted to do. So in ’88 I got to come back as a volunteer coach and spend a little bit of time with the high school JV program at Goshen,” Snyder says. “I started to think maybe I could come back home and try to make a difference when I graduated from Troy.”

In 1992, he got a job as a PE teacher at Banks Middle School, where he worked with the girls basketball and baseball teams. But in the afternoons, he would still drive back to Goshen to volunteer with the football team. A couple of years later, Snyder was hired as the Goshen Middle School PE teacher, JV football coach and assistant coach for the varsity team.

Finally, in 2009, Snyder got the opportunity to take over as head coach of his hometown team. From the start, he felt like he approached the game from a different angle.

“High school football is something that just about everyone can get out there and be a part of,” Snyder says. “I really wanted to make sure that anyone who wanted to play knew that they could come out there and be part of our program. And hopefully, contribute to success. The way we looked at it, there’s always something for somebody.”

The crowning success of those 12 years was a 2017 run to the state semifinals that saw everyone in Goshen and the surrounding towns rally around the team. For all the challenges of his job, those nights when the whole community came together will always stick with Snyder.

“A lot of people say it’s very hard to coach in your hometown. But I really believe it can be a blessing if you’re patient and you do things the right way,” he says. “You always have to give your best, and I think that’s something we did.” 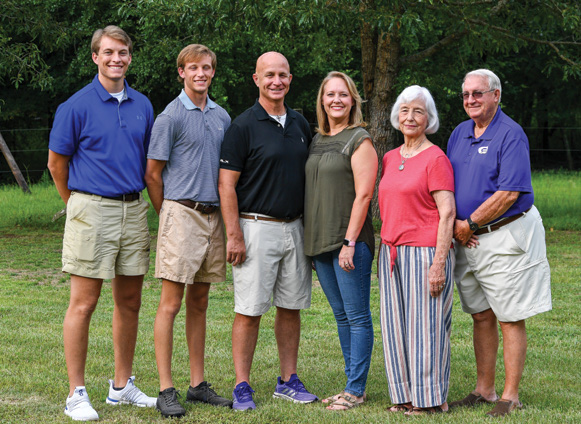 Three generations of the Snyder family have been part of the Goshen program. From left to right: Brock, Will, Bart, Stephanie, Linda and Keith.

Snyder has never been able to stay away from Goshen football for long, so he can’t say with any certainty that he won’t find his way back one day. For now, he hopes to continue teaching while he decides where his next path will take him. Whatever it turns out to be, he knows he will always support the program however he can.

“Goshen is a very special place, and not just because it has been such a big part of my life and my family’s lives,” Snyder says. “It’s the nucleus of so many communities that come to the school. The football games give everyone a focus point to come together and have a sense of belonging.”

More than anything, he hopes he was able to make some sort of impact on the players he has coached that can repay all Goshen has given to him.

“I’ve always felt football is a great tool to learn how to deal with hard times when other people are counting on us,” he says. “If I made a difference for anybody, I’m thankful. But I’m most proud of the difference those athletes and students have made in my life and how they’ve made me a better person.”