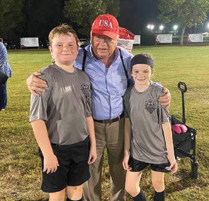 Whenever Jimmy Copeland was asked what drove him to serve his community, the answer was simple enough. Whether it was as part of the Pike County Commission, as a member of the Troy National Guard or as special project director for Troy Cable, he wanted to build a community his family could grow in for generations to come.

“He and [Troy Cable General Manager] Dick Freeman would say they were able to grow up here and make a living here,” says his son and Troy Cable Construction Manager Chad Copeland. “Their goal was to create a community where their kids could grow up and raise their grandkids here as well.”

By the time Jimmy Copeland passed away in July at the age of 69, he had accomplished that much and more. He was elected to represent District 2 on the Pike County Commission in 1989 and served there until his term was interrupted in September 1990, when he was deployed with the National Guard to Operation Desert Storm.

“He was very proud of the fact that he was able to bring everyone on his team back from Iraq,” says Troy Cable Chairman Vicki McPherson. “He was just the kind of person you want on your team. Someone you know you can depend on and could always trust.”

In 2003, Jimmy Copeland joined Troy Cable and worked in a governmental affairs role for nearly 20 years. It was a job well-suited to someone who never met a stranger and always took an interest in the lives of everyone around him.

“He was special projects director and he was special to everybody,” says McPherson. “He always offered encouragement and motivation. He was a true friend to each and every one of our employees.”

While Jimmy and Chad Copeland worked very different jobs for Troy Cable, their roles often brought them together. One of those projects, a 2010 partnership with South Alabama Electric Cooperative, proved to be transformative for both the company and the region. Together, they helped bring fiber internet service to the cooperative’s substations, laying the groundwork to tremendously expand residential fiber access throughout south Alabama.

“From my perspective I thought they were crazy because we were a small company and that was an extremely big project,” says Chad Copeland. “That model has now been used in a lot of places to further rural broadband. But I can’t stress how forward-thinking they were in what they did on that project.”

Jimmy Copeland led the charge when it came to convincing local leaders that the benefits of fiber service in their communities would far outweigh the short-term work of getting it there. McPherson says she, Copeland and Freeman didn’t worry about the challenges in the moment.

“It was a huge project, but we just didn’t know we couldn’t do something like that,” she says. “We set our mind to getting it done and were dedicated to doing that.”

In the end, Troy Cable finished the project ahead of time and under budget, allowing them to build almost 100 more miles of cable than originally planned. That infrastructure set the stage for the company’s growth and eventual acquisition in October by Mississippi-based telecommunications company C Spire.

“It happened at a time when Troy Cable was still growing and it was a major expansion for us,” says Troy Cable CEO Jake Cowen. “Beyond the surrounding areas it opened the door to build service to Montgomery and Dothan and really expanded our network in a big way.”

A foundation for the future

While that partnership proved to be a crucial turning point for Troy Cable, it has also had a lasting impact in Pike County and beyond. Now a county commissioner himself, Chad Copeland credits the arrival of major manufacturers like Rex Lumber and Universal Precast to the availability of high-speed internet.

“If those companies had found out they couldn’t go where they wanted and get broadband access, or had to pay another $250,000 to get fiber access there, that’s a deal killer,” he says. “With that fiber expansion, SAEC and Troy Cable together opened up south Alabama’s footprint to a lot of economic development and growth that wouldn’t have been there without it.”

In that way, the fiber project helped Jimmy Copeland achieve his goal of making Pike County a better place for his kids and grandkids to live their lives. He even got the chance to watch as one of those grandkids, Max Copeland, went on to participate in the SAEC Youth Tour in 2018. There Max was chosen to represent Alabama at the National Rural Electric Cooperative Association’s annual meeting.

“When I think about Jimmy I think of that Aaron Tippin song ‘You’ve Got To Stand For Something,’” says McPherson. “He stood for what he believed in and he didn’t back down from it. We miss him every day and we’re so proud of the influence he’s had on Troy Cable and everyone here.”