When cooperative leaders set out in 1965 to construct a new building for South Alabama Electric Cooperative, they were thinking about more than just the work being done at the time. They were also building a home for the cooperative and its members for decades to come.

It was a job well done. That building served the cooperative and its people for more than 55 years, through periods of tremendous growth and transformation in the electric industry.

Today, SAEC has a brand-new home. And like the last one, it was built with our community in mind. We now have the space needed to better serve a system that continues to grow. We have implemented new features that members have long requested such as new drive-thru windows. There is even a designated community room to host local events.

All of that is possible thanks to the hard work of local builders who made all of our dreams for this new headquarters a reality. From the materials used on its walls to ensuring construction costs would not be passed on to members, SAEC’s new home was truly built by and for the people of South Alabama.

As soon as preparations for the new building started, it became clear many trees on the existing site would need to be cut down to make space. But rather than dispose of them, SAEC saw an opportunity to use those same trees in the construction.

“This land belongs to the members, so we didn’t want anything to go to waste,” says General Manager David Bailey. “We decided to take wood from the members’ land and use it in their new building.”

Once the trees were cut down there was no question about where to send them: Whigham Construction.

Harry Whigham started the business in 1975, following in the footsteps of his father, who was a carpenter. He spent years earning experience on whatever jobs he could get and eventually found his niche constructing custom homes.

When Whigham’s son, Jared, graduated from Auburn University in 2005 with a master’s degree in engineering, he returned to help run the family business. Following Hurricane Ivan the previous year, the company had built up a large supply of lumber, which Jared Whigham saw as an opportunity.

“We were helping people clean up their yards since we had the equipment to move trees,” he says. “We started accumulating all these trees, so we went and bought a sawmill to saw them up.”

That expansion has helped Whigham Construction cut out the middleman for  clients and give them access to custom doors, trim and more that they wouldn’t be able to find anywhere else. And the company’s personalized attention to each project’s needs is what initially appealed to SAEC General Manager David Bailey.

“Mr. Bailey knew we had a small sawmill, so he called me,” Harry Whigham says. “They had taken down several huge pines on the building site, and, like me, he didn’t want to see them go to waste.”

Whigham Construction had worked with on-site lumber before, but never on the scale required for SAEC’s new building. It started out small — just paneling for an office or two — and grew from there.

“They liked the look of it so much they decided to do more,” Whigham says. “Plus, they took down some more trees for the parking area and, again, didn’t want them to go to waste. So, they brought them to us, too.”

In all, Whigham estimates that the company processed as much as 10,000 feet of lumber for the new building. Each piece had to be cut to the right length and width from the logs available. The wood was air-dried and then kiln-dried to bring the moisture content down before being planed and milled.

In all, the process took about two months. The result was high-quality wood paneling and trim throughout the building. 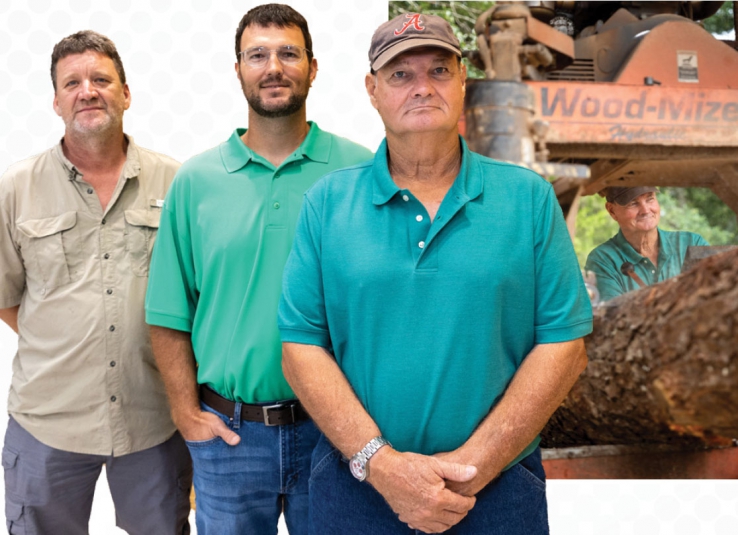 An eye for details

Once the wood was delivered, it was in the hands of Danny Stephens, owner of S&S Cabinets. The company opened for business in June 1989, and Stephens has been installing cabinets, bookcases and vanities ever since.

“I’ve always enjoyed it, even back in high school when we built a little gun cabinet to hang on the wall,” he says. “Being able to physically put something together and look at your work, that’s satisfying.”

Stephens’ passion for the job hasn’t changed, but his tools of the trade definitely have. A CNC, or computer numerical control, router takes care of the most precise cuts, while a 43-inch belt sander takes away some of the grunt work.

“It doesn’t matter how good you are, you aren’t as good as a machine,” he says. “It really speeds up production. Then, I get to do the fun stuff like assembling, painting and installing everything.”

Stephens’ expertise and problem-solving abilities made him the right choice to work on SAEC’s new building. It all started with a trip the general manager made to ask him about the trim and types of joints they planned to use for the project.

“I reckon I answered the right questions for him and helped him understand everything,” Stephens says. “He put me in touch with Harry, and from there it was a joint effort to get everything like they wanted it.”

Once Whigham delivered the trim to the construction site, Stephens got to work installing it. Stephens kept a close eye on the details, like making sure the sconces on one wall of the board room matched up with the beams on the other.

“Little things like that make the job look better,” he says.

That dedication to getting everything just right is one of the reasons Stephens thinks the project called for someone with his experience.

“I think about the people who will paint and stain the wood after me, and I try to make it easier on them,” he says. “I can picture what it will look like when it’s finished and foresee a problem. I can fix it so they don’t have to redo it.”

Anticipating those potential problems ahead of time helped ensure every job only needed to be done once, keeping construction costs for the building down. That was a top priority for everyone on-site since SAEC set the goal of not passing any of the building costs on to members.

Both Whigham and Stephens kept that front of mind from the very beginning. Whigham was particularly proud of the money he was able to save the cooperative by producing the moldings for the building himself, rather than sending them off to a contractor.

For Stephens, SAEC’s dedication to keeping costs down for its members was evident by how involved the leadership was in the construction day to day.

“It makes all the difference in the world. If you run into something where there are several ways to do it, you could get David and a couple other folks down to figure it out,” he says. “That was definitely a money-saving and time-saving feature of the whole project. They were very good to work with.”