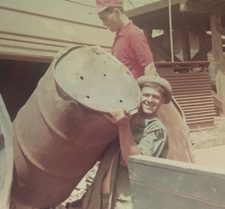 Like American Legion posts across the country, Post 145 in Brundidge is a home of sorts to veterans born and raised in its community, as well as those who have migrated to South Alabama from across the country. Four years ago, Commander Neil Thrasher decided to start honoring those who had gone above and beyond in service to their country with a Wall of Honor at the post.

“Everyone on that wall has a local connection to Pike County. They may not have been born here, but they lived here, died here, and they served honorably,” says Thrasher, who served in the Navy as a navigational electronic technician on nuclear submarines. “This building isn’t just another Legion post. It’s a shrine to honorable veterans.”

The wall recognizes 30 veterans with local connections, as well as notable veterans throughout history. These include a trio of Medal of Honor recipients: World War I hero Sgt. Alvin York, World War II hero 1st Lt. Audie Murphy and 1st Lt. Robert Howard, an Alabama native and one of the most highly decorated soldiers of the Vietnam War. The top row is reserved for local soldiers killed in action, among them Ensign Joshua Watson of Enterprise, who died in a shooting at Naval Air Station Pensacola in 2019.

“The wall is for veterans who did more than just the average. I made six patrols with the Navy, but I’m not on the wall,” Thrasher says. “A lot of us did our job, but these veterans were exceptional. They gave more than just a day’s work. Most of them gave blood.” 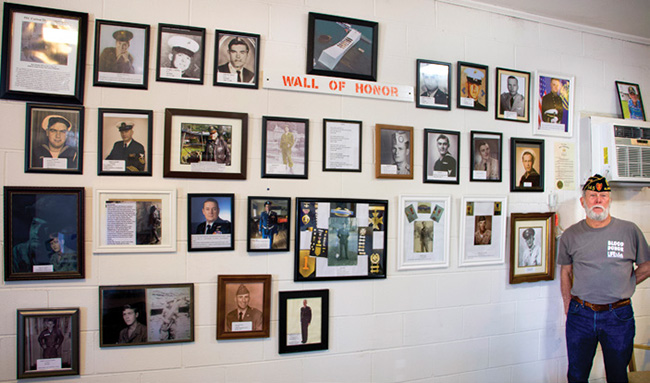 Commander Neil Thrasher and American Legion Post 145 in Brundidge honor local veterans who have gone above and beyond in service to their country with a Wall of Honor.

One of the locals honored on the wall is the post’s former commander, Bruel Davis. Davis dropped out of high school to join the Navy during World War II. After the war ended, he finished school and earned an engineering degree before returning to active duty and retiring as a Navy captain.

“He has really been an important leader for this post,” Thrasher says. “Before he took over, this post was used but it wasn’t taken care of. It was a disgrace to veterans. He led the work to get it turned around so it could become what it is now.”

Now 94, Davis’ service to the nation and to his local community has not only earned him a spot on the Wall of Honor, but also a new scholarship fund in his honor that Post 145 may begin offering this year.

Alongside Davis on the wall is 72-year-old Wayne Murphy of Ariton, who earned his spot after serving two tours with the Army in Vietnam as part of the 169th Engineer Battalion from 1968 to 1970. Driving a 10-ton military tractor, he would haul equipment, ammunition and even downed helicopters for the 199th Light Infantry Brigade and the 11th Armored Cavalry Regiment.

Murphy gets emotional when he thinks about his photo hanging on the Wall of Honor next to those who spilled blood and gave their lives in service to their country. But as a Vietnam veteran, the recognition means all the more for having been a long time coming.

“When I came home, like most of the Vietnam veterans, we weren’t welcomed back,” he says. “Being on the wall now means so much to those of us who didn’t get the recognition at the time. It’s a blessing to me, and I know it is for many others.”

In addition to honoring veterans themselves, Murphy hopes the Wall of Honor can continue to play an important role for the local community. Post 145 is always committed to supporting local veterans, students and first responders. But Murphy sees something different in people’s eyes when they view the Wall of Honor.

“It just means a lot to the community that they can come by and visit the wall, because these are all local people,” he says. “There have been school classes that have been here and looked at the wall. It makes them glow to see the sacrifice that a lot of these soldiers made.”

While every American Legion post is a mix of locals and transplants, Thrasher hopes the wall will help the people of Pike County better understand the veterans living right next door.

“A lot of the posts in the South do not have a local identity when it comes to their veterans,” he says. “The veterans on the Wall of Honor are all local to the Pike County area. They served honorably and never asked for anything. But it’s important to remember them because so much of that history can be thrown away or lost.”

Most of all, Thrasher hopes the wall can help preserve the legacy of those who have been ready to sacrifice everything in service to their country. “We want to recognize them to make sure the people in this community and throughout the nation never forget,” he says. “That’s a slogan among all veterans, because the worst thing you can do is forget somebody.”