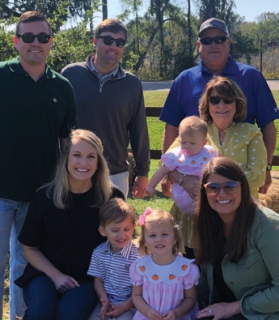 No matter where you live or work across the SAEC service area, there’s a good chance Terry Rodgers has helped connect your power. After his 45-year career as a construction and service foreman, Rodgers looks back with gratitude on his recent retirement from the cooperative.

Rodgers started his career at SAEC in 1976, just four days after his 18th birthday, and he’s seen plenty of changes through the years.

“When I started, we had two bucket trucks and two line trucks. The rest were pickups,” Rodgers says. “It’s changed a lot, but it’s been good to me and my family. I’ve really enjoyed it.”

Reflecting on his career

Other than a short time in lineman school, Rodgers learned through on-the-job-training. Initially starting as a grounds-man, by age 29 he was a construction foreman leading workers throughout the service area. Members of Rodgers’ crew spent their days connecting new residential and business members, and building or rebuilding lines, among other things.

For the last four years of his career, Rodgers worked as the service foreman, which involves connecting and disconnecting meters, troubleshooting, working on security lights and lots of public interaction.

“Terry Rodgers’ knowledge of South Alabama runs very deep. We used that knowledge to help train newer employees and Terry was always willing to teach the new linemen,” says General Manager David Bailey. “I’ve always thought that when Terry told you something about the electrical system, you better sit up and write it down because it’s that important.”

Regardless of the job title or what was scheduled, Rodgers had the same goal each day.

“I tried to send whoever was working with me home just like they came to work,” he says. “It’s a lot of dangerous work, and it just takes one slip-up. I’m proud no one ever got seriously injured on my teams.”

There are very few states across the Southeast that Rodgers hasn’t visited to help rebuild after major storms. The hurricanes were memorable for Rodgers, particularly Opal.

“When it was over, we didn’t have a single meter left turning,” he says of the 1995 Category 4 storm that cut a path of destruction through the heart of Alabama. “It was five days before we got the first substation back up.”

After about two weeks, power was restored with the help of more than 200 visiting linemen. At other times, Rodgers returned the favor, traveling to restore power for communities in need.

“There’s a lot of pleasure in it,” Rodgers says. “When you get someone’s power back on, it makes you feel good about your job. You know you’re making a difference.”

After 45 years of work, it’s not just Rodgers who looks forward to retirement. His wife, Teresa, will also be happy to relax.

“With two kids at home, it was just as much of a job for my wife as it’s been for me,” says Rodgers. “Every time I was on call or out of town, she was too.”

Now, instead of worrying about the next big storm, Rodgers will focus on travel, a nice “honey-do” list and his grandkids, and maybe even take up fishing again.

“I won’t miss getting up in the cold weather or the rain,” he says. “But I’ll miss the early mornings drinking coffee together. I’ll miss seeing everyone and camaraderie. It’s been a great career.”