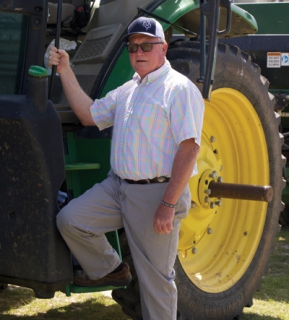 If Tim Sanders ever needs a boost of energy, he recalls how South Alabama Electric Cooperative linemen approach their jobs.

“When they’re called, they put in the work. They are dedicated,” Sanders says. “They inspire me to be dedicated, too.”

Sanders brings that spirit to the South Alabama Electric Cooperative board of trustees as the new District 7 representative. The board approved his selection in April following the recent retirement of Glenn Reeder.

“He’s very humble, and he’s very willing to serve the members of SAEC, which I think is one of the greatest attributes to have in an electric cooperative trustee,” says David Bailey, SAEC’s general manager.

Sanders has a track record of serving his community. A farmer in the northern Coffee County community of Frisco, Sanders is on the advisory committee of First South Farm Credit, a cooperative financial institution that helps rural communities in Alabama, Mississippi and Louisiana. He also maintains a role on the Coffee Baptist Association’s finance committee and is a deacon at Roeton Baptist Church in northern Coffee County.

“I enjoy doing things for the community,” Sanders says. “I have a lot to learn about electric cooperatives, but I want to find ways to help all the members of the cooperative.”

Sanders believes his greatest attribute may be the managerial skills he has developed while running a farm since 1980. He currently operates seven chicken houses, farms peanuts and cotton on about 600 acres of land and owns about 80 head of cattle. The farm also produces its own hay.

A lifelong resident of District 7, Sanders attended Troy University and studied business before going into farming full time. He is married to Cindy, a teacher who retired from the Enterprise City Schools system but who now works on a contract basis for Ozark City Schools. The couple have two daughters, Abbey and Callie, and one granddaughter, Willow.