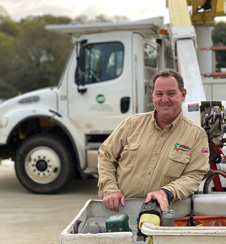 If you dislike strenuous work, being a lineman isn’t the job for you.

For Jamie Johns, South Alabama Electric Cooperative’s construction foreman, and Blane Senn, SAEC service foreman, the physical nature of the job isn’t an issue. Neither are the weather, the hours nor the time away from family. With nearly 60 years of combined experience, they take the difficulties of the job, and their responsibilities as foremen, in stride.

“There’s only a few of us with this career, and it’s not the easiest job to do,” Senn says. “But we’ve never been afraid of a little bit of hard work.” Both he and Johns took over foreman responsibilities about a year ago.

“Being foreman is a totally different job,” Johns says. “You have to watch everything you do. It’s my job to make sure the work gets done and make sure everyone goes home safely.”

Often working in extreme temperatures and during storms, watching over their crews is sometimes easier said than done. “I’ve been out there with lightning flickering all around, heavy rains, snow and more,” Senn says. “In the end, you know you’ve got a job to do. You get satisfaction from getting someone’s lights back on because you’re filling a need for them.”

They’ve formed strong bonds with their co-workers. “You stay out here long enough, working with these guys day and night, and you become like family,” Senn says.

“We don’t have a bad group of guys working out here with us,” Johns adds.

While both Johns and Senn now have a large, extended work family, that wasn’t always their goal. Johns took a job at SAEC only two weeks out of high school, and Senn joined the SAEC team at age 25.

“I never thought about doing this for a living, I just happened to be the right person at the right time,” Senn says. Seizing that opportunity also helped him meet his wife, Tonya, who was a receptionist at SAEC when the two started dating more than 25 years ago.

There’s always an unexpected element to the work. “The blizzard of 1993 was my first major storm,” Senn says. “It was thundering through the night, and I just thought it was a rainstorm. When I woke up the next morning, I couldn’t see my car in my driveway because it was covered under a snowdrift. The job keeps you on your toes.”

“You don’t ever know exactly how you’re going to do the job until you get there,” Johns says. “You learn something different every day.” 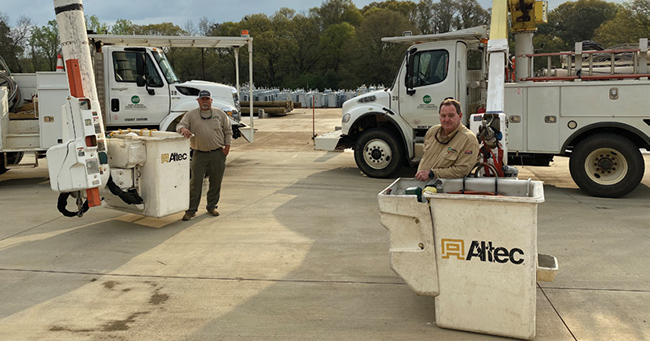 Foremen Blane Senn (right) and Jamie Johns (left) are in charge of overseeing their crews and making sure their work is done safely and correctly.