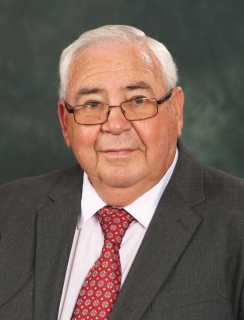 SAEC General Manager David Bailey met Johnny Garrett during preparation for the cooperative’s 2020 annual meeting. The drive-thru meeting was a change to the traditional format, and Garrett was eager to help out wherever he could.

“We had to do a lot of preparation for the roads and set up tents. Johnny was always there willing to help,” says Bailey. “He was out there with his tractor one evening smoothing the paths for members to drive on, and I said to myself, ‘He would be an excellent trustee for the members of the cooperative.’”

Shortly thereafter, the board’s search committee voted unanimously for Garrett to fill the seat vacated by Bill Hixon to represent members in District 1. By November, he was sitting in on his first meeting of the board of trustees.

Garrett is no stranger to local leadership. He has been an active member of the Pike County Cattlemen’s Association for almost 20 years. He has served on the board for 18 of those years, acting as president for three of them. He has also served as treasurer for 14 years and continues to fill that role today.

Now retired after nearly 50 years in the grocery business, Garrett tends to the cows and hay fields on his farm when he isn’t giving back to his community. It’s a schedule that keeps him busy, but he has never been afraid of hard work.

“I pride myself on never giving up and staying at something until I get it solved,” says Garrett. “You learn that fast on the farm. There are so many things to do and some of them you may not know how to do. But if you keep trying, you’ll figure it out.”

It was his desire to serve his family, friends and the community he loves that ultimately drove Garrett to join the SAEC board. And while Bailey values Garrett’s leadership experience and keen mind for business, it’s that desire to serve he believes is most valuable.

“The most important thing our search committee looks for in a candidate is a servant heart, a humble spirit and the willingness to do what’s right for the membership of the cooperative,” says Bailey. “I think it’s that attitude that will make him a great trustee for SAEC.”