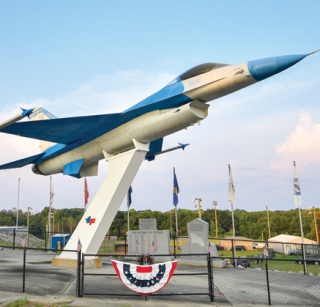 Highland Home School may be best known for its awesome nickname, the Flying Squadron, and the eye-catching F-16 fighter jet that sits in front of the school on Highway 331 in the northern part of Crenshaw County.

Principal Gary Coleman, who’s going into his second year in that position, says HHS reflects a small, rural community where teachers and parents are involved. “I like the fact that it’s family oriented,” says Coleman, a Bullock County native who immediately felt comfortable in the school and area. “The people are very welcoming, very nice, open to other ideas, and they’re very supportive.”

The school competes in Class 2A, Region 3 in football with county rival Luverne. Highland Home is still seeking its first state championship in any AHSAA sport. The 2018 football team recorded the program’s first 12-win season with a run to the state semifinals.

The school’s nickname, the Flying Squadron, is one of the most colorful and well-earned nicknames in sports at any level. The origin of the name dates back to 1941, when the attack on Pearl Harbor drew the United States into World War II. All 11 members of the Highland Home football team entered the military’s airborne division, and the sport was dropped for the duration of the war.

The school changed its mascot from the Panthers to the Flying Squadron after the war. In 2008 it received the F-16 that is proudly displayed in front of the school. The fighter is no replica — it saw active service in the Air Force for many years, starting in 1980.

Highland Home’s community spirit is exemplified in its partnership with South Alabama Electric Cooperative. Several years ago, the football and baseball fields desperately needed new lights. The school purchased the lighting and the poles. SAEC assembled the lights and provided the installation after parents and local electricians wired switch boxes and installed the underground components. SAEC set the poles, mounted the lights and positioned them. Since then, the co-op has changed bulbs and realigned the lights as needed.

“Our coaches are very appreciative and complimentary of the partnership with SAEC,” Coleman says.