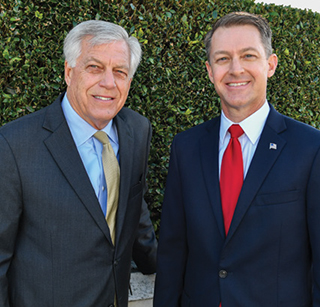 “When he got into politics in the ’90s, we were there as a family to help him get elected,” Wes remembers. “We were an active part of campaigning for him and supporting him and what he stood for.”

Years later, watching his father’s political career inspired Wes to serve as probate judge for Pike County from 2009 until his own run for office as representative for District 89 in the House. By that point, Gerald had made his move to the Senate, making the Allens the first father-son duo in Alabama history to serve alongside each other in the state legislature.

“He’s a wealth of knowledge. He’s someone that I can go to and ask for advice on who I should talk to about certain issues,” Wes says.

Now, in the last year of his term as a state representative, Wes is hitting the road to campaign for Alabama’s secretary of state. And this time, it’s his father’s turn to line up beside him. Not that Gerald is the least bit surprised.

“Watching him grow up, he always gained the respect of his peers by working hard, being honest and fulfilling his commitments,” Gerald says. “That’s just the way he is. So it hasn’t surprised me at all to see what’s developed with him.”

While his role in the House has been a new one for Wes, growing up in a political family meant he knew what he was getting into. His time as a legislative liaison for the Probate Judges Association gave him experience with the legislature, but it was watching his dad that showed him what the job really meant.

“It’s still a job about the people, even though the state representative role is a little different from being a probate judge,” Wes says. “It’s still about being responsive, solving problems and making their communities better. Just being around Dad, I knew how the whole process worked. Nobody works harder than Dad for his district.”

In that time working for his district, Gerald says he’s most proud of legislation that paved the way for the Mercedes Benz MBUSI plant in Tuscaloosa County in 1995, a voter ID law passed in 2011 and an amendment to the state constitution banning the use of “foreign law” in Alabama courts.

While Wes may not always vote the same way as his dad, he considers himself to be in the same conservative vein. As a result, they had a close working relationship between their different houses of the state legislature.

“We share a lot when we’re in Montgomery,” Gerald says. “To me it is certainly a benefit to be able to hear from someone you trust and believe in.”

Over his last few years in the legislature, Wes’ focus has been on removing state regulations for Alabama business owners. For each of his last three sessions in the House, he has brought forward a bill that would give the legislature oversight of new regulations suggested by state agencies. The bill has yet to pass, but he hopes the fourth time will be the charm in 2022.

“When you take on bureaucracies, sometimes that type of legislation is hard to move,” he says. “But we feel like we have a lot of stakeholders on board and some momentum this year to get it right.”

With three years of his term in the House now under his belt, Wes is turning his eyes to secretary of state. If elected, he hopes to draw on his years of experience as a probate judge to make sure state election officials have the support they need.

“The secretary of state is the chief election official for the state, and I have the experience to administer election law,” he says. “I’ve worked with probate judges, circuit clerks, sheriffs, poll workers and the Board of Registrars. Those are the folks that really get it done, and we’ll be there to support them.”

Rather than making any changes to Alabama’s election system, Wes sees maintaining the status quo as the priority.

“Alabama has an excellent election process, and we need to protect it,” he says. “We need to make sure that we don’t give in and weaken our election law by doing some of the things that we’ve seen done around the country.”

That includes prohibiting mail-in voting, eliminating ballot collection and not allowing more than a single night to determine election results. “We do a very good job in Alabama, because at the end of the night you’re going to know who wins and loses,” he says. “You’re not going to have to wait weeks.”

All in the family

When Gerald first ran for office in 1994, he was inspired by his own father’s service as a four-term county commissioner. Now, as he supports Wes’ campaign more than 20 years later, he’s proud that he was able to provide the same example for his son.

“It’s an honor as his father to support him in any way that I possibly can,” Gerald says. “It makes his mother and myself very proud that he’s continued the same type of path that he had as a youngster.”

If there’s one thing Gerald has learned from his decades in office, it’s that family support is crucial for any politician. Whether they’re getting behind a microphone or not, a run for public office puts everyone in the spotlight.

“It’s a commitment from the entire family when a candidate makes a decision to put them before the public,” he says. “It requires every family member and relative to educate themselves and work to do what needs to be done.”

Even more important than that support, Gerald says, is the willingness of political candidates to put their families first. For the Allens, that has meant occasionally talking shop at family gatherings while attempting to separate politics from their personal lives.

“I think it is critically important that candidates are mindful that their first responsibility is to their family,” Gerald says. “You have to make sure they’re taken care of and they aren’t put in circumstances that may be harmful to the family unit.”

As he mounts his campaign for secretary of state, Wes will draw on his own experiences as a judge and in the House. But he will also be looking to his father’s example of how to help the people closest to him and those he represents.

“At the end of the day, it’s about service and making the state better,” he says. “It comes down to people, and I have no better example than how my dad lives his life, operates and treats people. To have his support means the world.”