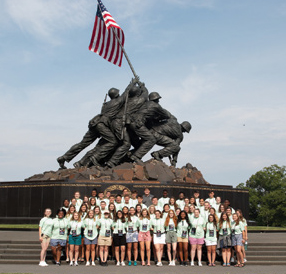 Max Copeland tells people that the version of himself who went into the South Alabama Electric Cooperative and National Rural Electric Cooperative Youth Tours is not the same person who came out of them. He entered the program as a high school junior who didn’t know much about the world outside his own bubble and left with a whole new perspective.

“There’s still a lot I don’t know. But going through the Youth Tour at such a malleable age really shaped me,” he says. “For rural kids, you can think the town you’re from is all there is. The Youth Tour opens your eyes to a larger world that really is out there.”

The experience opened doors for Copeland. Not only did he attend the Montgomery and Washington, D.C., Youth Tours, but he spoke at SAEC’s 2018 annual meeting and was even chosen to represent Alabama at the National Rural Electric Cooperative Association’s annual meeting.

Three years later, Copeland is now studying political science at Troy University. But he still chalks his success up to the lessons he learned on those Youth Tour trips.

“It taught me a lot about engaging with others and learning about people, which is so important in any field,” Copeland says. “It can be easy to get caught in your own echo chamber. Getting out and being able to meet other people who might not think the same, look the same or act the same was great because it opened my eyes to a world of difference, which you don’t always get locally.”

Copeland has spoken to students who, like him, weren’t sure what to expect from the Youth Tour. He tells them what he wishes he’d known then: The experience can have a profound impact on their future.

“I know there’s a lot of kids out there who think it’s just another reason to miss school. But it’s important to understand how great an opportunity it truly is,” Copeland says. “It will change you positively more than anything else you can be a part of. It will open doors that you could never open yourself.”

The Youth Tour was Makayla Burgess’ first opportunity to fly on a plane and take a trip out of her home state. The experience unlocked new possibilities for her future, but it also gave her a greater interest in the past.

“I had never been into history lessons. It wasn’t my favorite subject,” she says. “But ever since the Youth Tour I really got into history. Last semester, I even took a history class that I didn’t need. I just wanted to gain more knowledge about history because that is what interested me.”

Burgess especially enjoyed learning about local civil rights history on the Montgomery Youth Tour. Later, when visiting the nation’s capital, she had the chance to learn more about how that local history fit into the larger national movement.

Just as importantly, the Youth Tour helped Burgess come out of her shell and gain confidence while talking to new people. It’s a skill she expects will be especially important as she pursues a career in nursing.

"Crenshaw County is very small. I used to not talk to more than five people,” Burgess says. “The Youth Tour really helped me open up. I’m not afraid to talk to people I don’t know. I really need that in the nursing field, where you’re going to have to see and talk to all kinds of people.”

When her high school guidance counselor asked her to return to talk to the junior class about the Youth Tour, she didn’t hesitate. “I try to encourage anybody I talk to to apply,” she says. “It’s just a really great experience to go.” 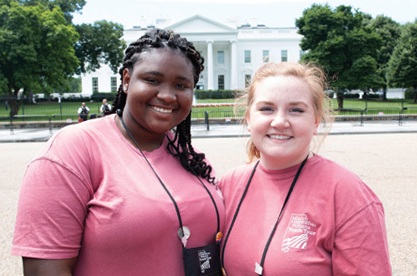 Not everyone who participates in the Youth Tour will take an interest in government or history, but Megan Starling still sees it as an invaluable experience. As a sophomore at Auburn University, studying wildlife sciences with the intent to pursue a career in veterinary medicine, she sees the program aimed as much at personal growth as professional growth.

“It still excites me that I got to do it,” she says. “But the beauty of it was that they wanted to translate what we were seeing and experiencing into real life for us. Whether that meant we wanted to be part of the government in some way in the future or not.”

Just weeks after returning from D.C., Starling lost her older sister in a boating accident. During such a difficult time, the people she recently met through the program suddenly became a much-needed support network.

“I just remember so many people reached out to me and were willing to pray for me,” she says. “For them to stay in touch and be there for me during such a hard time, even though we’d only known each other for a little while, I think that’s a testament to the people who were part of the trip and how it shapes you.”

The experience also opened Starling’s eyes to the important role larger support networks play, whether it’s the government, a cooperative or her own university.

“I think what it taught me the most was that there are always resources available no matter what help you need,” she says. “Just like I’m now aware of the inner workings of the government that are there to help citizens, my passion in undergrad has been to make sure I’m aware of students’ needs and the resources available so I can help them, directly or indirectly.”

ARE YOU READY TO APPLY FOR YOUTH TOUR?

Here's what to do

Two of those students will also be selected to attend the National Rural Electric Cooperative Youth Tour in Washington, D.C.

If you want to attend this once-in-a-lifetime trip, here’s how to apply:

The Montgomery Youth Tour will be March 15-17. A panel will review all applications and conduct interviews in January to select the winners.