’Til the Cows Come Home 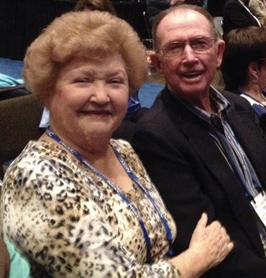 Board member Bill Hixon dedicated his life to family and farming

Some people want to travel the world. Others want to explore every state in the country. But for Bill Hixon, everything he wanted to see was right on his own farm. When he did venture away from it, he would count the hours until he could make it back.

“I remember David Bailey telling me about a trip they went on together for the cooperative,” says Hixon’s son, Billy. “At 5:30 in the morning on their last day, he heard someone banging on his door. It was Daddy telling him to get up so they could go. That was him. He’d been gone a few days, and it was time to get home.”

The Hixon family farm traces its history back more than 120 years to when Johnny Hixon bought around 150 acres of land. Since then, each generation has added to it. Bill Hixon’s dad, Delmer, purchased another 350 acres of land during his lifetime. Bill and his wife, Betty, grew it to approximately 1,200 acres, and Billy Hixon added poultry farming to the mix.

Billy Hixon spent more than 30 years working the farm alongside his father, but he inherited his love of the land much earlier. He remembers riding tractors around the farm with his dad as a 5-year-old and never wanting to do anything else. Now that his father has passed away, that work has taken on new meaning for Billy Hixon. “I’ve got a big job keeping this farm the way he wanted it, and I’m going to work hard to keep it up,” he says. “It’s a great legacy.”

Billy Hixon reckons that, like many farmers, his father was just born to work the land. But there was a moment in Bill Hixon’s life when it seemed he might fol-low a different path. When he graduated from Pike County High School in 1951, he accepted a football scholarship at Troy State College, now Troy University, making him the first football player in his high school’s history to be awarded an athletic scholarship.

He went on to study physical education with the intention of one day becoming a coach. Ultimately, the draw of the farm was too much to resist, and Hixon never looked back. But his love of sports continued to be infectious and something he shared with his family for decades to come. “We’re big Auburn fans, and I go to all the football games,” says his oldest daughter, Kim Wise. “We always had a good time rehashing the games together, and we spent countless hours watching Billy’s sons play baseball in college.”

“Daddy loved coaching, and now his grandsons are carrying that on for him,” says Billy Hixon. “I know he would be so proud to see my boys coaching together.”

To his family, it was never a surprise that Hixon felt a call to leadership. While he might have preferred to stay home, he also felt responsible for making his voice and those like his heard. “Whatever he was doing he felt like it was important to be represented and to be a voice for what you believe in,” Billy Hixon says. “If you don’t speak for yourself, no one else will. He knew that someone has to be willing to go to the meetings and leave the farm for just a little while to do certain things. He felt a calling to do that.”

As it turned out, he was suited to the role. His family describes Bill Hixon as a natural peacemaker, able to see multiple sides of any argument and bring people together. That skill set, along with a level head and a genuine spirit, made him approachable to everyone in the community. “He could sit down with sena-tors to talk about the latest bill and with farmhands to talk about their problems, all in the same day,” Billy Hixon says. “He was the same man no matter who was around. People knew that and respected him.”

In addition, Bill Hixon served on the South Alabama Electric Cooperative board of trustees for nearly 13 years. He was proud of the time he spent serving his cooperative and community. “He made a lot of lifelong friends through the fellowship with that board,” Wise recalls. “Those people meant a lot to him, and it meant just as much to get things done for the people in his district.”

It wasn’t just Bill Hixon’s passion for farming that constantly drew him back home, but also his deep love for his family. His younger daughter, Beth Collier, remembers how he never wanted gifts on special occasions, just the company of his loved ones.

“My brother and sister’s families live here, so we would always eat as a family at least once a week,” Wise says. “We just always made the time and the effort to get together. Even our extended family in Albany, Georgia, would always make the trip at Christmas just to come for a day to be together.”

Between the strong connection with his family and with the land his ancestors had worked, Billy Hixon says his father was the most satisfied person he knows. He was happy to save and sacrifice for his kids, never getting caught up in the chase for a bigger house or a fancy car. “He loved doing what he was doing and didn’t want anything else,” he says. “The best way to describe him is he was a simple man.”

In many ways, the Hixon family and the farm they have lived on for over a century are inextricable. Bill Hixon took great pride in the fact that five generations of his family had worked the land. Today, with Ross and Amy Hixon living on the land with their new baby, a sixth generation calls it home. And it’s everything the child’s great-grandfather could have wanted.

The SAEC board breaks ground on construction for SAEC’s new building. Hixon demanded due diligence for any major projects but came to fully support the new building.