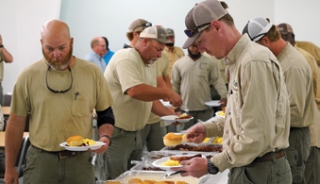 Being a lineman isn’t for everyone. Often, they are called away from friends and family to work long days and nights in difficult conditions. They might be asked to ignore storm damage on their own property for days while they restore power for neighbors they may have never met.

“It’s not an easy job. But every one of our linemen knows what they signed up for and is willing to make sacrifices for our members,” says Ronald Wade, manager of engineering and operations for South Alabama Electric Cooperative. “It really is a calling.”

As a result, linemen tend to share a level of dedication to the job and develop tight bonds with one another while working long hours together. Being able to trust the other members of their team and having an understanding of each person’s strengths and weaknesses is crucial when working with potentially dangerous electrical equipment.

The camaraderie among SAEC’s linemen was apparent on the afternoon of June 1 and the morning of June 2, as the cooperative hosted its Lineman Appreciation event and annual breakfast. The events were put on in association with Alabama’s Lineman Appreciation Day, established in 2014 by state legislators.

SAEC hosted the events at its Troy office as a way of giving back and saying thank you for the essential work that linemen do to provide affordable and reliable electricity for its members. Cooperative leaders also attended to express their gratitude in person.

“Most people probably don’t think about the work linemen do until the lights go out. But the truth is they work tirelessly all year long so those moments of darkness are few and far between,” General Manager David Bailey says. “This was just one small way for us to let our linemen know we appreciate all their hard work.”

SAEC General Manager David Bailey thanks the SAEC linemen for their efforts in always answering the call to serve the membership.