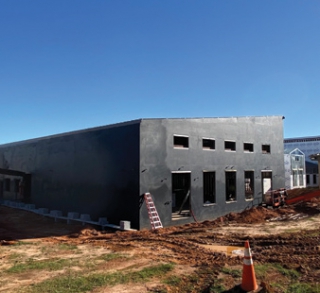 Some members may have already noticed the walls and brickwork going up around the administrative portion of the new building. While the cooperative’s office staff are eagerly awaiting the building’s completion, some SAEC employees have already had the chance to take advantage of other new facilities.

Construction of a warehouse and fleet area was completed last summer, so the cooperative’s linemen and construction crews have enjoyed the space since Labor Day. For General Manager David Bailey, the advantages of that new facility are already clear.

“As much as we had outgrown our current building, when it comes to employees, we had also outgrown our storage,” he says. “We’ve got transformers, breakers, regulators, capacitors and so much more. Now, it’s all accessible so our crews can get to it without having to move everything around.”

With four construction crews and four service crews preparing each morning for work, that extra room is crucial to keeping operations running smoothly. It also helps protect members’ investment in the cooperative’s equipment.

“Everything is under cover, where before it wasn’t, so things are able to stay cleaner and in better condition,” says Ronald Wade, manager of engineering and operations. “Those are expensive pieces of equipment, and keeping them out of the elements means they can last longer.” 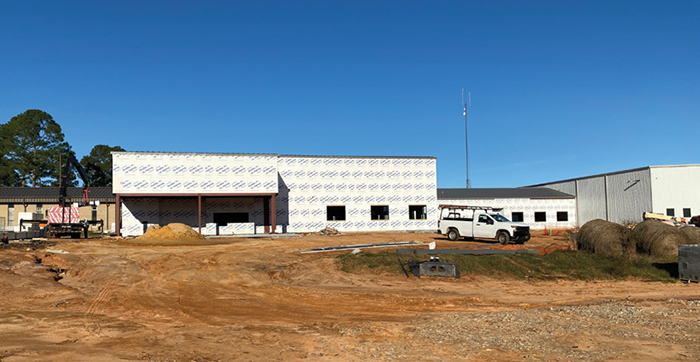 SAEC’s new home will immediately provide more room for staff and storage and is also designed for future expansion.

SAEC leaders want its new facility to feel like home when members enter its lobby and offices for the first time, right down to the building material. One way cooperative leaders decided to accomplish this was by using wood from the property.

As plans for the new building took shape and construction began, it became clear that many trees would need to be cleared.

“Many of these trees were there when our current building was constructed,” Bailey says. “They’re old-growth pines that we’re thinking might be around 100 years old. So we didn’t want to just destroy them. Instead, we decided they could give the new building a unique look.”

As the finishing touches are put on the new facility, that wood will be used to give the boardroom, offices and hallways a bit of local flavor. It will also be the foundation for a special “Member Wall” in the lobby which will recognize some of SAEC’s largest industrial accounts.

“It’s a way for us to be good stewards of the environment,” says Andy Kimbro, manager of member services. “At the same time, we can mark how the cooperative has changed over time and give our new home a special touch of history.” 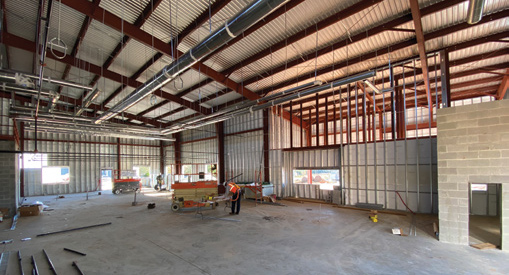 SAEC’s new building will feature a community room for civic events available at all hours.

Once complete, SAEC’s goal is for the new facility to be a great place for employees to work and for members to handle cooperative business. The hope is that it will be an asset to the community at large. That starts with a new and improved community room open to local civic groups.

Some members may recall that SAEC’s current building had a similar community room available years ago. Its limited size, placement far from the kitchen and security issues that required it to be unavailable when the offices were closed, however, were problematic. Eventually, it became a space primarily used for cooperative business.

“We hated that. There’s nothing like this our community can use, and it was important for us to use this opportunity to give back,” Kimbro says. “It’s one of our core principles to support the community, but it was also just the right thing to do.”

The new community room is structured so that it can host community events for civic and economic development groups. It is expected to accommodate more than 250 people and seat more than 150 for dinners.

While members can look forward to visiting their new cooperative building late this summer, the facility is also designed for the potential of future expansion and adjustments. That includes two sites prepared for electric charging stations as electric vehicles become more common along Highway 231.

“We’re really trying to think ahead and incorporate everything we might reasonably need in the future,” Bailey says.

And while the 2020 storm season was brutal for SAEC and surrounding cooperatives, those challenges helped clarify the need for a new place to call home. It even provided inspiration for some improvements along the way.

“Through the storms we’ve experienced and seen other cooperatives go through, it’s been a reminder that you can’t wait until a crisis hits to build something you need,” Kimbro says. “It showed us what we’re doing right and some things we can still tweak in the process so we build something for our members that will last for a long time to come.” 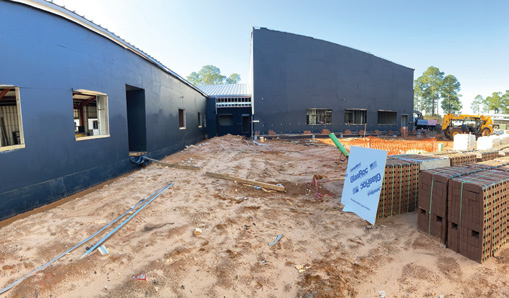 Construction on SAEC’s new building is expected to be complete later this summer.