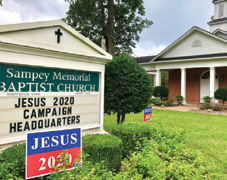 South Alabama residents may have noticed signs for a new third-party candidate popping up in front of houses in their neighborhood. Mixed in among the yard signs for one political candidate or another are an increasing number of campaign-style signs that read “Jesus 2020.”

The campaign for Jesus started in July at Sampey Memorial Baptist Church in Ramer when Joyce Hubbard and another member of the church, Martha Sikes, were concerned that Christians throughout the country were not making their voices heard. 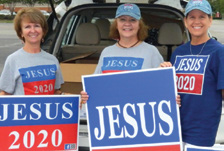 “Everyone was just frustrated and tired of all the political rhetoric,” says Hubbard. "We decided we would put Jesus on a sign and put it out there for everyone to see, like they do with politicians. We just wanted Jesus to be visible.”

They started by printing 200 signs to give out to members of the church and others in the community. The first batch proved so popular that they turned to Wells Printing Co. in Montgomery for help making more.
“We didn’t have any idea where it would go, but we prayed about it and just wanted to be the spark that started the campaign and the ministry,” Hubbard says.

Just a few months later, Hubbard and Sampey Memorial have given away more than 7,000 “Jesus 2020” signs, and Wells Printing has printed 30,000 others for orders coming in from outside Alabama. Those orders have come from states all across the country and even locations as far away as Puerto Rico and Nigeria.

Each sign the church gives out is free, but Hubbard says Sampey Memorial has received enough donations to cover more than half the money spent on the campaign. Wells Printing has even printed the signs at a lower cost to support the cause.

“We felt like there is so much on TV, signs and billboards everywhere you look, but you don’t see Jesus anywhere. So we put him right out there among everything else,” Hubbard says. "Everyone who has put that sign in their yard is part of this ministry.”

Hubbard hopes the campaign will continue to gain momentum beyond the presidential election and even the end of the year. She and other members of her Sunday school class already have some new ideas in the works to keep their ministry going.

“I’ve had so many conversations with people just like us who feel like Jesus has been put aside and we need a revival in this country,” Hubbard says. “People will always need to elect Jesus to lead them, so a campaign like this never really ends.”