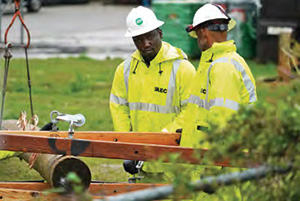 During storm recovery Electric System Engineer Mike Chirico usually coordinates crews from the office. But when the extent of the damage caused by a storm that swept through South Alabama Electric Cooperative’s service area on April 19 became clear, he knew the system would need all the help it could get.

“I actually went out there and started pulling wire that night,” he says. “I got one of our contractors to come in as a construction crew, and since I was familiar with them, it made sense to lead them around. I just paired up with them and worked with them the whole time.”

Meanwhile, Manager of Engineering and Operations Ronald Wade was tracking outages using the cooperative’s SCADA and outage management system. The damage was almost overwhelming, impacting just about every part of the system.

“It was so hard to determine where we even needed to start,” he says. “From 11 p.m. that night, when those unreal winds came through, we had a little over 12,000 accounts out. That’s more than 70% of the system.”
On the ground, it quickly became clear to Chirico that much of the damage would require more than a quick fix. Across the system, trees had been uprooted and thrown across lines that would need major repairs.

“Some storms are mostly lightning damage, so you can basically replace a fuse and get those members on. This was not one of those storms,” he says. “This was one where every outage call we got would have multiple spans of line down with trees on it. This was a real storm.”

Construction Foreman Dewayne McGhee and his crew were called in at 11 p.m. Sunday night. By 1 a.m., they were working on the main feeder line out of the Fullers substation north of Luverne as PowerSouth made repairs to its transmission lines. Once the substation was up and running, they joined in the effort to rebuild lines across the system.

“We worked all Sunday night and all day Monday and probably got back in at about 11 p.m.,” McGhee says. “We were able to go home, but we had to come back and get breakfast at 5:30 and start all over. So you were looking at 18- to 24-hour days all week.”

“When we put out the call for help, our sister cooperatives were ready and willing to respond,” says General Manager David Bailey. “We are deeply grateful for the crews who volunteered to make the trip, sometimes from across the state, and look forward to repaying the favor.”

Those cooperatives pulled together to provide nearly 150 extra linemen to help tackle the repairs. Together with SAEC’s crews, they were able to restore power to the vast majority of members over the next few days.

“In this case, the numbers came down pretty rapidly. We concentrate our man-power on the lines that get the most people on the quickest,” says Chirico. “So normally we fix the feeders and line sections that will bring on hundreds of members at a time first. Then, in the last day or two, we might work half a day to pick a line that gets one or two customers back on.”

Repairs faced a delay on Thursday as another storm swept through south Alabama. By Friday evening, linemen were finally able to return home at a normal time. For many, it was the first chance they had in almost a week to assess damage to their own property.

“It’s hard to come out here and work knowing that you’ve got damage at home and stuff you can’t check on until you get everyone else’s power restored,” says McGhee. “But that’s part of our job.”

“It makes you feel like they really do care about you. Even with the coronavirus going on, there were people bringing us a nice hot meal while we were working and couldn’t get to anything,” says McGhee. “I thank them for what they did and making sure that we were taken care of and staying safe.”

Members also made their appreciation known, with many sending thank you notes to SAEC’s linemen. Some members even came out and thanked the crews on their street personally. “We had one member who brought a box of potato chips, snacks and drinks to the crew I was with,” says Chirico. “You’ll run through a wall for people like that because you know they appreciate you. It’s a big deal.”

Those moments are also a reminder for many linemen why they do what they do. For all the challenges they face, some linemen have even come to enjoy the restoration efforts after major storms for the way the cooperative and the community come together.

“We look out for each other at this cooperative. The same goes for the contractors and other cooperatives that came to help us, many of them from north Alabama,” says Chirico. “You can’t recover from a storm like this without some help. But they know and we know that when they’re in trouble we’ve got their back, too. It really is a family.” 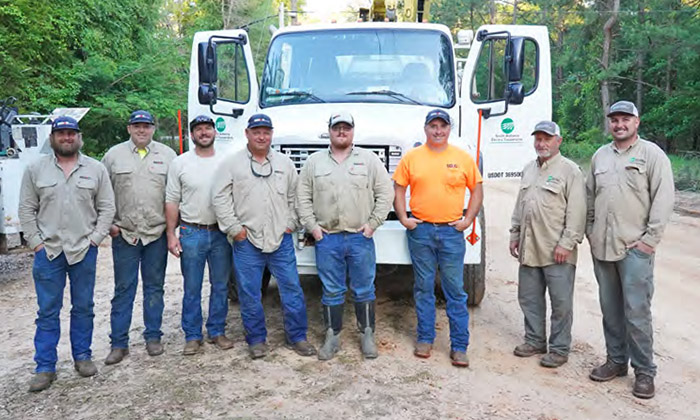 SAEC linemen James Horn and Cord Crider worked alongside crews from cooperatives like Marshall-DeKalb Electric to restore more than 12,000 outages following a storm on April 20.