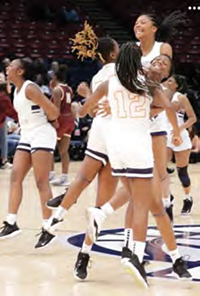 While the paths to victory for the Pike County Bulldogs boys and Charles Henderson Trojans girls basketball teams varied, they ended with the same result: high school state championships.

Pike County toppled Lauderdale County 59-45 to claim the Alabama High School Athletic Association’s Class 3A boys title in basketball. Charles Henderson edged Madison Academy 50-48 to win the AHSAA Class 5A girls championship in February. For the Bulldogs, it is the first state basketball championship in program history, while the Lady Trojans earned their second title in three years.

For Troy-based Charles Henderson, the journey to an undefeated season began just moments after a loss to Ram-say in the 2019 regionals ended the Lady Trojans’ bid to repeat as Class 5A champions.

“We had motivation,” says coach Dyneshia Jones, whose program has reached the semifinals in three of the last four seasons. “Although we lost two seniors, we still had Division I NCAA type players and Division I junior college players.”

The incentivized Trojans sunk hours of effort into the weight room and summer workouts, which paid dividends as the 2019-20 season progressed, Jones says.

“We had a lot of committed players during the summer,” she says. “I’ve never had a team that had the 15 roster spots filled, because it’s tough to be a part of this program. Credit the young group for stepping up.”

The younger players supplemented the efforts of Division I signees Samira Moore, who signed to play for Troy University, and Niaira Jones, who inked a scholarship with Belmont University. The combination ultimately produced 29 wins, many by double digits, and no losses.

In the playoffs, Charles Henderson won games by 68, 54 and 40 points before edging Madison Academy by two for the title.

Just about 8 miles to the southeast, Pike County High is in the small city of Brundidge — a place known more for its athletic prowess on the gridiron. Five Bulldogs football teams have won a state title.

In recent years, though, Holland has built Pike County’s basketball program into a contender, and he used the Charles Henderson program as a model.

“State tournament appearances are like an annual trip for them,” he says. “Even though it’s girls vs. boys, we modeled our program after them. If you look at them, it’s not easy being on their team. If it were, 14 or 15 would be on their bench.”

Despite the tough practices and work-outs, the Bulldogs didn’t gain momentum until after tragedy struck. Teammate Reginald Edwards passed away from injuries sustained in a car accident during the Christmas holidays, but the team rallied, Holland says.

“The players started focusing on working harder in practice,” he says. “You could see the trend. They were getting better.”

Holland realized Pike County had the ability to win a state championship after the Bulldogs defeated traditional 7A power Central of Phenix City, pushed Class 6A Final Four participant Eufaula to overtime and lost a close one to Class 6A Dothan during a tough stretch of games.

After edging nearby Pike Road in the regional semifinals with a 77-73 overtime victory, the Bulldogs won the next three games by more than 10 points each en route to the championship.

“We have great support. The people in Brundidge care about athletics,” he says. “The tragedy brought us together as a community and was a vital part of the stretch run.”

Some of the support, especially during the state tournament, came from the Lady Trojans. Coach Jones says familiarity inspired that development.

“My girls and their boys are always at the Troy Recreation Center playing pickup games,” she says. “Our girls were cheering them on. It’s not like how it used to be when there was this big rivalry between Brundidge and Troy.”

“Most electric cooperatives, by nature, serve rural areas, and South Alabama Electric is no different,” he says. “That is why having two state champions within our service area represents a tremendous accomplishment and a great reward for years of hard work, dedication and focus. We are proud to serve fine people like these teams in Pike County.” 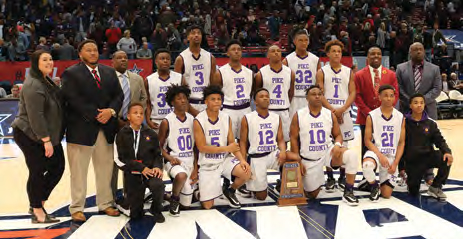 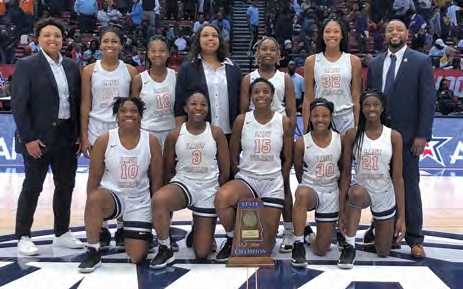 The Charles Henderson Lady Trojans with the AHSAA Class 5A championship trophy after defeating Madison Academy 50-48 for the title in February.
PHOTO CONTRIBUTED BY DAN SMITH.