Vera Tisdale can still remember the first time her family moved into a house with electricity. For her mother, the home in Brantley meant their activities were no longer dictated by the rising and setting of the sun. But as a 5-year-old in 1924, Tisdale was happy she and her friends could play longer.

Now 101 years old and once again living in her hometown, Tisdale looks back at those days of play in her childhood as formative experiences that defined her creativity and desire to be an active member of her community. They even shaped her career as an educator.

“I would put my dolls up in a row, and I had a little blackboard on a screened-in back porch,” Tisdale says. “So I started teaching at a very young age, and I continued it for 36 years.”

After graduating from high school in 1937, Tisdale had her sights set on Troy University, which at that time was Troy State Teachers College. Tisdale began working on her degree as part of the school’s first class for the National Youth Administration, a New Deal work-study program.

By her junior year, Tisdale was on course for her future. She was chosen as one of 13 students to take full-time teaching jobs for credit during their senior year. Then, on the cusp of fulfilling her childhood dream of becoming a teacher, the 1941 attack on Pearl Harbor changed everything.

Visiting the local movie theater for Saturday matinees was always a thrill for Tisdale growing up. So it was no surprise that on Sunday afternoon, Dec. 7, 1941, Tisdale found herself at the movies with her date. They had arrived early, so she waited in her seat while he went to get popcorn.

“I’ll never forget, when he came back he looked at me and said, ‘I can’t believe what I’ve just heard. Japan has bombed Pearl Harbor,’” Tisdale says. Shortly after, the manager confirmed the news to the audience. “That was the change of my life, because the whole world was different to me after that.”

When the school year finished, she moved to Mobile to work at Brookley Air Force Base, where she joined other volunteers in disassembling and testing aircraft radiators.

“That’s when I really learned about people and how different they are,” Tisdale says. “They came in all sizes and shapes, but we worked with every person who wanted to help.”

B-24 bombers would occasionally come through with their full crews before deploying. From the moment they arrived to the moment they left, Tisdale noticed how the crews would never leave their plane’s side. “They would stay with it right up until they painted a logo or a pretty girl or the name of the plane,” she says. “You could see how proud they were of it.”

After 2 1/2 years in Mobile, Tisdale knew it was time to finish her degree. Troy University had been temporarily converted into a radar school for the armed forces, so she waited a semester to resume her studies. After taking classes every summer for several years, she finally completed her degree in 1947. 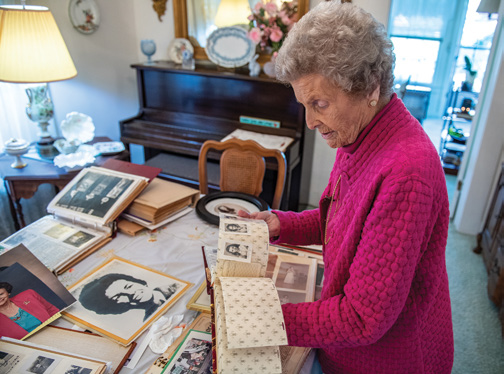 Ms. Vera Tisdale displays a few of the many photos she has accumulated during her life. The Brantley native turned 101 this year. PHOTO CONTRIBUTED BY JOEY MEREDITH

A roadmap for success

Tisdale didn’t waste time getting back into the classroom. She taught for six years at elementary schools in Atmore, Tallassee and Andalusia before taking high school positions in Troy, Dothan and Albany, Georgia. At the latter, she set up a distributive education program, teaching students marketing and everyday skills through a combination of classroom courses and on-the-job training.

Her work attracted attention from universities throughout the Southeast as they set up similar programs. Ultimately, Tisdale couldn’t pass up a chance to teach alongside her beloved Crimson Tide, and she took a position at the University of Alabama in 1965.

At the university level, she was tasked with teaching other teachers, but the goal remained the same: to create a roadmap her students could follow for the two-year program and beyond. That required an understanding of each student on an individual level, something she fears has been lost in education.

“I tried so hard to build a student’s self-esteem. You’ve got to look at their abilities and what they can do,” Tisdale says. “Today, we think all students need is to learn how to use a computer. But it’s different from being taught to reason, look at both sides of a question and make a decision.”

After 14 years at the University of Alabama, Tisdale retired and returned home to Brantley in 1979 so she could take care of her aging parents. It was a difficult decision, as it meant abandoning her hopes of earning her doctorate.

With more time now available to her, Tisdale began compiling a history of her hometown with the help of her cousin Debbie Roberts. The project led to a lasting friendship with Brantley Mayor Bernie Sullivan, who regularly found himself drawing from her well of knowledge.

“She’s probably the best historian I’ve ever been around,” Sullivan says. “I’m originally from Florida, so if I had any questions about the area I could always call her.”

After her parents passed, Tisdale took some time to recover physically and emotionally before deciding it was time to see more of the world. First on her list was to take the Grand Tour, a trip based on the custom of visiting the cultural landmarks of classical Europe.

“I’d always been interested in history, and it was so good to see the places I’d studied and read about,” she says. “I advise anybody who wants to go to do your reading first so you’ll know what you’re looking at.”

Tisdale quickly became Roberts’ favorite traveling partner thanks to the historical context she could provide wherever they went. In particular, she remembers visiting Civil War sites in Buford, South Carolina, and Williamsburg.

“We went to graveyards and churches, and everywhere she knew the whole history,” Roberts says. “Her background in history is what made things come alive.”

A legacy of learning

Tisdale has been many things to the people in her life. To her cousin Chuck Burgess, she is defined by her generosity to others. To Roberts, she is an example of how to age with grace and dedication to the community. To Sullivan, she’s the model citizen.

As for Tisdale herself, the legacy she hopes to leave behind is one of giving confidence and curiosity to the students she has met throughout her life, whether inside or outside of the classroom. Those hopes were vindicated on her 100th birthday when she received dozens of letters from former students.

“I had 40 letters from former high school students thanking me for what I’d done for them,” Tisdale says. “Each one had the same theme: You made me feel like a good student. That’s my legacy if I have any.”

When she moved back to Brantley more than 40 years ago, Tisdale didn’t plan to stay permanently. But as the years passed, she found it increasingly difficult to leave her hometown. As far as Mayor Sullivan is concerned, it’s the community around Brantley that makes it hard to resist. And Tisdale can count herself among the most beloved members of the town she calls home.

“I always say, if you visit Brantley you get the scent in your shoes and you don’t want to leave, because of the people,” Sullivan says. “She’s one of those top people. That’s in a nutshell what she means to me. She means Brantley.”