Gone to look for America: Harry Richardson’s life behind the wheel 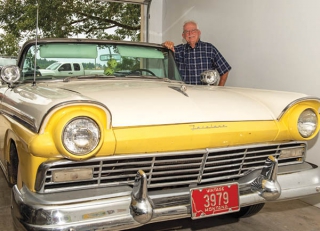 By the time he turned 24, Harry Richardson had grown used to being called small. It hadn’t stopped him from serving for six years as an Army engineer, but on the hunt for a new job in Memphis, he kept running into the same roadblock.

“I’m just a little guy, but I’ve got some spunk in me,” he says. “But at that time in history, there were height and weight requirements for some jobs.”

His first idea was to apply to be a motorcycle policeman. They told him he was too short and didn’t weigh enough. Next, he went to the fire department, where they said the same thing. Then he saw in the paper that Greyhound Lines was hiring bus drivers.

When Richardson showed up, he quickly realized he was the youngest and smallest of the more than 60 people applying. He took the written test anyway and left expecting to be passed over once again. Later, when the hiring manager called him, he heard a familiar refrain. But this time there was a twist.

“The guy called me up and said, ‘Richardson, you’re too short and you don’t weigh enough.’ I told him I’d heard that before. Then he said, ‘But you’re the only one who passed the test.’ So I became a Greyhound bus driver.”

Now 76, Richardson has never stopped driving, whether for Greyhound, for his own bus company or to shuttle South Alabama Electric Cooperative’s representatives for the Montgomery Youth Tour to the state capital. While it may not have been his first choice, there is no place he would rather be than behind the wheel.

“I’ve been driving a bus for 51 years now and covered over 4.5 million miles,” Richardson says. “I guess you could say it’s in my blood.”

Leave the driving to him

Richardson didn’t know much about driving buses when he joined Greyhound, and he had no choice but to learn fast. One of the most important skills he picked up along the way was how to man-age people, and not always under friendly circumstances.

“With Greyhound, I drove so many different types of people, from poor to rich, foreign or domestic,” he says. “You learn a lot about people and how to handle different personalities. In my decades driving for them, I probably had to have 400 people pulled off the bus for being disruptive.” That calm under pressure and dedication to his passengers’ safety would also set Richardson apart as he vied for the privilege of transporting famed football coach and commentator John Madden.

Since Madden didn’t like to fly, Greyhound buses would ferry him from game to game during the NFL season.

“It was like the pony express, because drivers would pass him off to each other to get him to his next game,” Richardson says. “We would have a bus driver rodeo to decide his drivers.”

Those rodeos included navigating through cones forward and backward, as well as tests where each driver would be timed on their ability to find hidden deficiencies in their bus. The competition could be tough, and only two drivers were selected from each state.

“I was one of the two they picked from Tennessee, and I was proud to be chosen,” Richardson says. “It made me feel like I must be doing a good job if they thought I was qualified enough to do that.” 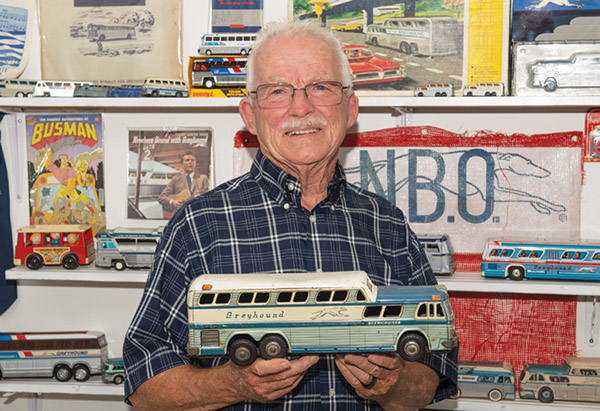 Harry Richardson’s favorite model bus is part of his collection of Greyhound and bus memorabilia he has acquired over his years of driving around the country. PHOTO CONTRIBUTED BY JOEY MEREDITH

Richardson left Greyhound after 23 years, but he didn’t stop driving. With industry contacts he built over years, Richardson established his own company and started driving independently. His first major contract was with University of Memphis Athletics, carrying teams, including John Calipari’s basketball squad, to games across the country.

But his real breakthrough was a contract with the National Defense University in Washington, D.C. At least once a month, military officers and foreign officials studying at the National War College, the Dwight D. Eisenhower School for National Security and Resource Strategy, and the College of International Security Affairs would take a trip across the country.

“They would give me their schedule a year in advance, and I would meet them at the naval base in San Diego, Boeing in Seattle, the U.S. Central Command in Tampa or somewhere else and drive them around while they were there,” Richardson says. “I worked with over 1,000 military officers from 100 different countries. It’s really kind of humbling to me.”

On those trips, Richardson had the chance to connect with future world leaders, like current Israel Defense Minister Benny Gantz, and he even brushed shoulders with President George H.W. Bush at his library in College Station, Texas. But he also enjoyed simply getting to know people who had grown up in different circumstances than his own.

“Some of the men from former Eastern Bloc countries would be very stoic when we met, and I would consider them my challenge for that year,” Richardson says. “I would learn all their names and where they were from, and after a couple of months we would hug whenever they got off the plane somewhere.”

Richardson retired after another 23 years of driving privately, but not before the National Defense University could honor his years of service with an honorary degree. Looking back, it is still one of the most surreal experiences of his life.

“They would have a graduation ceremony every year, and that year the president of the university had a diploma and a plaque for me,” Richardson says. “I remember looking at the crowd and seeing King Abdullah from Jordan clapping for me. All I could think was, ‘Wow, all of this for a bus driver.’”

While Richardson spent most of his life in Memphis, Troy has always been his first home. It’s where he spent the first five years of his life on his grandfather’s farm and where his family has tended to the Richardson Farm for over 125 years. When he retired six years ago, he knew it was time to return.

“My dad moved to Memphis for work right after World War II. But I always felt like it was my destiny to come back here and help take care of the place,” he says.

Even in retirement, Richardson hasn’t been able to give up the road entirely. He still drives part time for Southern Coaches, getting behind the wheel to take groups from Troy University and local high schools where they need to go. He especially enjoys driving Youth Tour students to Montgomery to learn more about their state government. 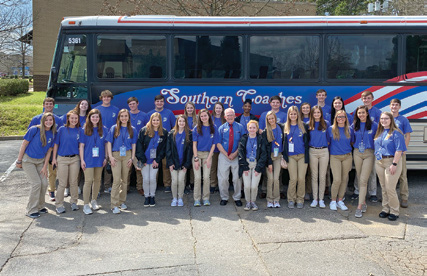 Each year Harry Richardson drives students from SAEC, Pea River Electric and Wiregrass Electric to the Montgomery Youth Tour where they learn about state government and the role electric cooperatives have in our state’s history.

“I look out for them like they’re mine, and I try to encourage them to do well in their studies,” he says. “I can still remember how to greet people in seven different languages, so I encourage all the kids to take a second language. The world is so small, and people from other countries really appreciate it when you make that kind of effort.”

Even after his decades on the road and millions of miles in the rearview mirror, Richardson still takes pride in his work. As far as he’s concerned, there are many road trips to come and more stories to hear.

“It’s a joy for me to do this,” he says. “For one, I know I’m good at it. But I also enjoy meeting different people. You never really quit learning about other people, different countries or different parts of this country. America is a beautiful place, and there’s so much to see.”