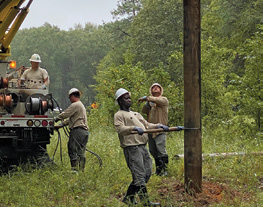 A busy storm season kept crews from South Alabama Electric Cooperative on the move in their own area and across the Gulf Coast.

From Hurricane Laura to Hurricane Zeta and one heavy storm in between, SAEC crews worked diligently to keep their own members’ power on and lent a hand to other cooperatives in need.

“This was the worst year we’ve experienced,” says Ronald Wade, SAEC’s manager of engineering and operations, “and I’ve been employed here now going on 33 years. This year has really taken a toll on the entire region. It caused us to get behind on some of the construction we planned, and we’re still trying to catch up. But when another co-op is in need, we go. Getting people’s power back on takes precedence over anything else.”

That was the attitude when eight-person SAEC crews were sent in back-to-back weeks to aid Beauregard Electric Cooperative near Lake Charles, Louisiana, in the wake of Hurricane Laura. Crews spent seven days, working long hours and living in tents, to restore power to the hard-hit area. After Hurricane Zeta, SAEC sent a seven-man crew to lend a hand to Southern Pines Electric Cooperative in Brewton, Alabama.

“It’s a different environment,” Wade says. “You have to be a dedicated person and be willing to go help out a neighboring cooperative or even a co-op in a neighboring state. The conditions aren’t always so pleasant, and you’re away from your family and things like that. That speaks to the dedication of the guys who are willing to help other utilities recover.”

Wade says helping one another out during the tough times is a common theme among the cooperatives that annually face major challenges brought about by hurricane season. SAEC is happy to be able to help out when needed and has also had to reach out to neighboring cooperatives for help in restoring power to its own members. “Twice this year we’ve had to call outside help in, which we’ve not had to do since Hurricane Ivan in 2004,” Wade says.

The similarity of the electric systems help SAEC and other cooperatives work together on repairs during storm season, allowing crew members to adapt from one system to another. “In the cooperative world, we try to utilize all the cooperative outside help that we can get,” Wade says.

ATTENTION SAEC MEMBERS: Our Interactive Voice Response system will be unavailable tomorrow from 8 a.m. until 1 p.m. due to required maintenance. Those who pay their utility bills via this method can use our SAEC Connect app or visit www.southaec.com to make payments. Maintenance like this helps us provide you with the best service possible. We appreciate your patience and apologize for any inconvenience caused.

Get the SAEC Connect Mobile App