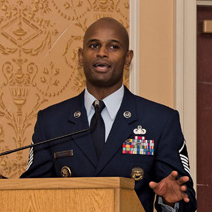 It’s not unusual to find Leray Smedley traveling to foreign countries alongside the vice president of the United States. In October, he rushed to Istanbul with Mike Pence to set up cease-fire talks with Turkish President Recep Tayyip Erdogan. It was just another workweek for the White House communications section chief of information technology.

But none of that would have been possible if one of his teachers hadn’t spoken up for him while he was growing up in South Alabama. While in kindergarten, he was initially identified as a special education student.

“I wasn’t tested in any way,” Smedley says. “In fact, I could read and do math on a first-grade level. But because I was black and I was poor, it was easy to say this guy isn’t going to make it.”

Smedley’s mother wasn’t willing to take that sitting down and neither was his first grade teacher, Mary Grider. Grider worked with him between classes and after school, eventually requesting that he be placed in her class. It didn’t take long for her to recognize that not only should Smedley not be held back, but also he was advanced.

“So the narrative changed from, ‘He should be in special ed,’ to ‘Maybe we should skip him up a grade,’” Smedley says. “But it’s because she believed in me. She risked everything to give me that opportunity, and she’s done that for so many other kids, as well.”

Smedley stayed on the advanced curriculum until he graduated with honors from Elba High School in 1996. He is quick to credit those early accomplishments to teachers like Grider, who helped him realize college was an option. Similarly, football coaches like Wynn Grimes and David Lowery emphasized the importance of his studies, and his stepfather instilled a respect for hard work.

“I like to look at it as my faith, my family and the faculty,” he says. “Every time I hit a roadblock or couldn’t see myself beyond a certain point, it was one of these parties who would step up and remind me and encourage me to keep going.”

There are many paths college students take to choosing a major, but Smedley’s might be the only one to go through the Atlanta rapper Ludacris and the actor Chris Tucker. As a student at the University of North Alabama, he entered a contest at Atlanta’s Hot 97.5 radio station put on by DJ Chris, who would later perform under the name Ludacris.

Smedley won the contest, earning him the chance to meet Tucker, an Atlanta native, and speak alongside him to a group of local students. Tucker was impressed by Smedley and asked him what his major was. Embarrassed to admit that he was still undecided, Smedley said the first thing that came to mind: computer science.

“He took me to a Best Buy in the limo and bought me a desktop computer,” Smedley says. “I went straight back to school, declared computer information systems as my major, and the rest is history.”

A few years later, he faced another turning point in his life. On Sept. 11, 2001, as he watched TV with his grandmother and saw the planes fly into the World Trade Center towers, Smedley decided to enlist in the U.S. Air Force. When he arrived at the recruiting station, an Air Force representative told him the only job he had open was an aircraft mechanic.

“I had no idea what a screwdriver was at that point, but I wanted to do something to serve my country,” Smedley says. “My uncles were Korean and Vietnam War veterans, so I thought if they could do it then, I can do it now.”

For four years he served as a fuel systems technician, troubleshooting F-16, A-10, U-2 and drone aircraft. Later, while stationed in California, he requested a change to a more IT-focused position. There, he could put his computer science skills to good use and mentor others as so many had invested in him.

Nearly a decade later, while stationed in Norfolk, Virginia, the White House came calling. One of the people Smedley had mentored was now working with President Barack Obama and had recommended him to join the White House Communications Agency. Smedley didn’t hesitate and, after an 18-month clearance and approval process, reported for duty in September 2016.

“The main thing that pushed me in those areas is my personal story,” Smedley says. “I was a child who felt I would never have the opportunity to go to college because I thought I would always be a product of my environment. I see so many other kids who feel they don’t have those opportunities, and I want to see them grow and find the best in themselves.”

A heart for people

Today, Smedley’s job is to recreate the White House communications environment wherever the president, vice president or first lady go. That means training and managing a team of over 100 technicians and taking charge of a multimillion-dollar budget to modernize the equipment they use on their travels.

It’s a high-pressure job that keeps him on the road more often than not. But it also means he gets the chance to see world leaders in a way that few people can imagine.

“You can turn on Fox News or CNN and see these people getting criticized for their appearance and their words. But interacting with them on a day-to-day basis, you get to know them as people,” he says. “At the end of the day, they just want to have lunch, hang out and crack jokes like regular people.”

While his current position gives him greater reach than ever before, Smedley has always made it a point to advocate for others. In 2011, he won the Spirit of Hope Award, presented by the Department of Defense to those who demonstrate exceptional commitment to improving the lives of U.S. soldiers and their families. The next year, he won the Presidential Volunteer Service Award, given to exceptional volunteers whose service has positively impacted communities across the country.

“I love technology, but my heart has always been for people,” he says. “I always wanted to find a way to tie the technology into serving people, and I think that’s the next chapter of my life.”

Moving forward, Smedley hopes to be able to work for more diversity in military leadership, a cause partly inspired by watching the president posthumously award the Medal of Honor in 2015 to two World War I soldiers who had gone unrecognized due to race and religion.

“That caused me to dive a little more into the military structure, and I noticed that there was historically a lack of leaders that were black and Latino,” he says. “In our current day and time, that has extended to gay, bisexual and transgender members of the military, as well. So how do we change this stigma that, because of the color of your skin, sexual orientation or religious background, you aren’t fit for leadership?”

He also hopes to have the opportunity to do more in his home-town of Elba, like organizing a community flag football game with the local police force to talk about the issue of police brutality. His ultimate goal is to make sure kids like him get the chance to prove how much they have to offer.

“The main thing that pushed me in those areas is my personal story,” Smedley says. “I was a child who felt I would never have the opportunity to go to college because I thought I would always be a product of my environment. I see so many other kids who feel they don’t have those opportunities, and I want to see them grow and find the best in themselves.”