KEEPING SAEC ROLLING: Bullard’s Garage kept SAEC vehicles on the road for half a century 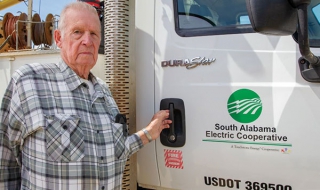 The humming of 37 engines radiates across the pole yard each morning as South Alabama Electric Cooperative linemen prepare for another day of service. The fleet of vehicles includes bucket trucks, digger trucks, pickups and SUVs.

“Those trucks make our linemen’s job much easier,” SAEC General Man-ager David Bailey says. “They allow us to work efficiently and to keep our employees safe.”

For 50 years, SAEC relied on two brothers — Glen and Harry Bullard — and Bullard’s Garage in Troy to keep the fleet running. If a truck was stuck or broken down on the side of the road, their response was swift. If a vehicle needed repairs after a shift, linemen would drop it off at Bullard’s Garage. By the next morning, repairs would be complete. The brothers even worked during severe weather and widespread electrical outages to keep trucks on the road.

“They were as important to South Alabama Electric as any employee,” says Wayne Mitchell, SAEC’s manager of stores and purchases. “If you called them, they would drop whatever they were doing and come fix it. They would always come, because they knew we needed it, and it didn’t matter if it was after hours or on Saturday or Sunday. They came running.”

A blessing in disguise
In 2019, Bullard’s Garage closed after serving the area since 1965. During its 54 years of operation, the garage special-ized in working with large heavy-duty trucks, including pulpwood trucks and farm trucks for customers such as Wayne Farms.

Bullard learned the trade from watching his father and uncle work on cars. When he was a teenager, he joined the National Guard so he could have some extra income to buy cars. He bought a 1940 Plymouth, a ’41 Chevrolet and a ’51 Pontiac. In the early 1960s, he gave drag racing a try and finished with 27 victories in six years.

“I told the fellow to meet me at the service station and I would put a ball joint on his car,” Bullard says. “They found out about that, and I got fired on Monday morning.”

From that, he decided he wanted to start his own shop, and a friend offered to rent him a building for $50 a month.

The new business did well. Bullard was one of the few people in the area who could work on larger trucks. Meanwhile, Harry Bullard was working at a welding shop. But he wanted to go into business with his brother, so he joined him to run the welding part of the business while Glen Bullard ran the mechanic shop.

Harry Bullard, one of the best welders in the area, earned the reputation of being able to build pretty much anything. He once built a lift for SAEC to help load heavy transformers and electric wire onto the trucks. He also built bodies for the trucks, toolboxes and a pole trailer. Any-thing they needed, he built it.

“We never had any problems in all the years we worked together,” Glen Bullard says. “We never had one argument or fight.”

A perfect partnership
A few years after the shop opened, Glen Bullard received a call from SAEC.

“They had a truck out near the county line between Troy and Luverne, and they wanted to know if I could go get it,” he says. “I went and got it, and I put a gasket on it from an old flathead Dodge and it cured that problem. The next day, the general manager wanted to know if I was interested in doing work on the trucks. That’s the way we got started.”

SAEC knew of Bullard’s reputation.
“It was like they were our own personal mechanic,” Mitchell says. “They have done anything for our trucks. A lot of times the crews would call at the end of the day and say there was a problem with a truck. They would drop it off at Bullard’s Garage, and by the next morning it would be back here and fixed.”

Bullard says they had engines sitting in their shop ready to go in case SAEC needed one changed out, which happened every few months. If one needed changing, they would stay and work late into the night to get it done.

“I needed the business, and they needed their truck back working,” Bullard says. “Back in the day, they didn’t have as many trucks as they do now. If one wasn’t running, that was a big loss for them. I felt an obligation to get the truck back to them as quickly as possible.”

The service Bullard’s Garage provided wasn’t limited to working on the trucks. During widespread outages, they would have their wrecker trucks out working alongside the line-men.

“Elba flooded in the early ’90s, and it rained so much that we had a lot of outages,” Mitchell says. “We didn’t have wenches on the trucks, so they would come and pull them out with their wrecker if they got stuck. They ended up working all night and had three wreckers out there. Even when Hurricane Opal came through, we had a generator problem at the office, and they were out there in the rain trying to fix it. They stayed out there all night. You can’t put a price tag on work like that. You could depend on them.”

As the years went by, it became harder for Bullard’s Garage to work on their clients’ newer heavy-duty trucks, which were more reliant on computerized systems that required repairs from vehicle dealers.
Bullard says it was a difficult decision to close the shop doors for good, but he also felt like the time had come. He says that what he has missed the most is the relationships he had with customers like SAEC.

“I was proud of the relationships with our customers,” Bullard says. “That’s why I stayed in business as long as I did, because of those relationships. Wayne would come by the shop and talk with me every now and then, and that’s what I loved. It’s hard to stop when you have relationships like that.”

SAEC was grateful for the many dedicated years of service Bullard’s Garage gave to the cooperative.

“A lot of people don’t realize how much it takes to keep the fleet running,” Bailey says. “There are always issues with them because of where those trucks have to go and the work they have to do. Bullard’s Garage kept our fleet running for years, and they did it well. Our cooperative is so grateful for everything they did.” 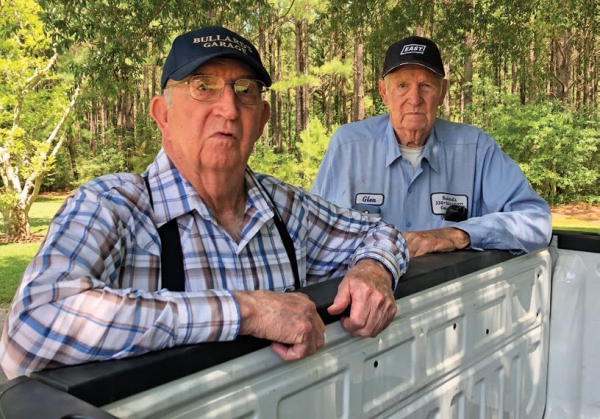 Glen and Harry Bullard showed a dedication to their customers that will be remembered long after their garage has closed.