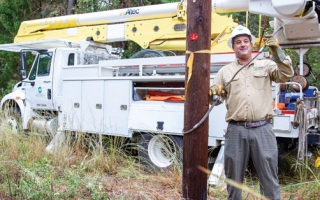 Like many of SAEC’s foremen, Billy Ray Lester worked his way up the ranks as a lineman before an opportunity to lead his own crew came along. Lester has worked at the cooperative for 28 years, starting out as a groundsman before working on a service truck and then a digger truck, and eventually serving as an A-class lineman for 20 years.

“I would do hot work, anything with live electricity that requires you to wear gloves, changing out poles, running the bucket truck,” Lester says. “There are always poles to change out or new lines to be built for our members, and you know they really appreciate it.”

When Lester’s foreman retired two years ago, he was given a chance to step up to construction foreman. The new position was a challenge since he was now responsible not only for his own safety but also that of his team. But he was prepared.

“I have to think about how we’re going to do the job, plan it out and think about the safest way to do things where nobody gets hurt,” Lester says. “Before, I mainly had to watch out for myself, and the foreman had already thought out the process.”

Since then, Lester has settled into his new role and is now celebrating two years as a foreman.

“Billy Ray is a real professional,” General Manager David Bailey says. “He has decades of experience as an SAEC lineman, so I don’t think it’s a surprise to anyone that he has thrived as a foreman these last couple of years.”

When Lester isn’t at work, he tends to the cow farm he and his wife inherited from his father-in-law. And while he used to take part in fishing tournaments, these days he mostly fishes for fun when he has time to take his boat out on the Alabama River. In fact, being able to take that love of the outdoors with him on the job is one of Lester’s favorite parts of being a foreman.

“I like being able to go different places around our service area and meeting new folks,” he says. “I like working outside better than working up in an office myself. We’re always out with the crew and having a good time together.”

When Billy Ray Lester isn’t working at SAEC, he tends to the cow farm he and his wife inherited.